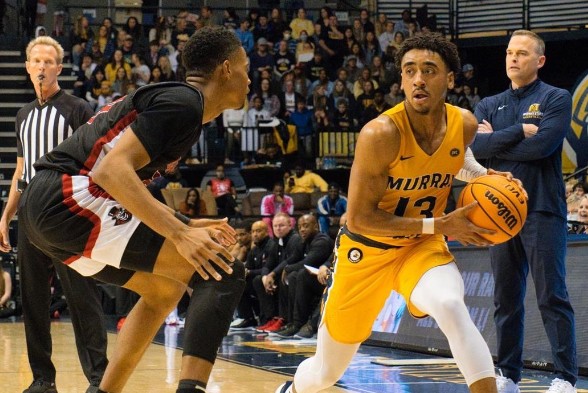 In the first game this season in NCAA D-I there is a game with a combined 50 or more wins when the Murray State Racers (26-2, 16-0) host the Belmont Bruins (24-5, 14-2) Thursday at the CFSB Center in Murray, Kentucky. Tip time is set for 8 p.m. in a game nationally televised by ESPNU. The Racers have won 16 in a row and Belmont 10 as Ohio Valley Conference titans clash in one of the biggest games of the week in collegiate basketball.

The game also marks the final regular season home game as the Racers honor their academic seniors before the game. Tevin Brown, Carter Collins, Jordan Skipper-Brown and KJ Williams will be on the floor pregame with their families as well as GA manager Jack Seltsam.

The Racers are in their third week of being in the national top-25 as they moved from 21 to 19 in the Associated Press poll and remained 21 in the USA Today Coaches poll. Three consecutive weeks of being ranked marks just the second time since 1971 that the Racers have stayed in the national spotlight for more than one week. The 2011-12 MSU team that was the final undefeated team at 23-0 and played their final 23 games that season as a ranked team. In the NCAA Net Rankings, the Racers are 26th this week and Belmont is 55th. The Racers remained second in the CollegeInsider.com Mid-Major Top-25, while Belmont is eighth this week. Belmont received five votes this week in the AP poll.

Streaks On The Line - In The Making

The current run marks the longest win streak in Coach Matt McMahon's seven seasons at MSU. His previous best was 13 in a row in 2017-18. MSU is trying to become just the sixth team to run the table in the OVC and the first to do it with an 18-game schedule. With their 25th win, McMahon and his staff are the first in the history of the MSU program to have three seasons of 25 or more wins. The Racers were 26-6 in 2017-18 and 28-5 in 2018-19. At home, the Racers are 14-0 at the CFSB Center this season and have won their last 15 games at The Bank.

In a clash of OVC titans, the Racers vs Bruins rivalry has been going strong since Belmont joined the OVC in the 2012-13 season. Since then, the Racers and Bruins have met for the OVC Tournament title five times in nine years. In seven of nine years, either the Racers or Bruins have been in the championship game.

Racers Move Up in AP Poll