Brown's New Scheme and Energy is Improving the Louisville Defense 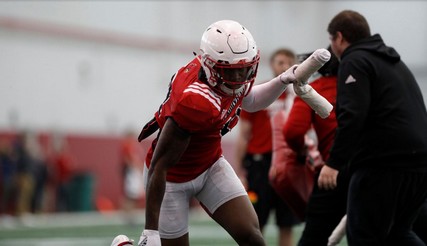 The University of Louisville defense has seen numerous changes over the last couple of seasons, and this year is no different with the addition of defensive coordinator Bryan Brown.

Working under their fourth defensive coordinator in the last four seasons, the Cardinals have found something intriguing with the hiring of Brown, who orchestrated a top-10 defense at Appalachian State last season.

Finishing their second week of spring practice, there is a new energy inside the practice facility, and it has led to improved play after just six practices.

"A lot of it is effort," Brown said. "That's the number one and most important thing for us right now. Giving effort and getting to the football and we've seen tremendous improvement since day one and that's a bright spot, it really is."

"The way the guys practiced from the very first practice and now they understand how we run practice and how hard we want those guys to practice. That's been a really big improvement since day one."

The Cardinals have put last season behind them, and are excited to look forward to the excitement and intensity of Brown's scheme.

"Spring football has gone very well," sophomore cornerback Anthony Johnson said. "It's all a new feel with the new coaches and a new playbook. I like the new defense and the new mentality the defense has after two weeks. We have a lot of good calls and we are doing a good job of mixing our coverages."

Finishing near the bottom of all FBS programs on defense last season, the Cardinals know that's not the standard around the football complex, and despite being only two weeks into learning a new defense, the Cardinals are close to getting on the same page.

"The next thing is execution," Brown added. "The other day we were laughing as a whole group as a defense. It was day number five and we actually had all 11 guys doing the exact right job on one play, so that's a positive. We're getting there. We're going to crawl before we walk. We're going to be okay."

In a short period of time, head coach Scott Satterfield has changed the culture within the Howard Schnellenberger Football Complex, and it has translated onto the field after just six practices.

As the team continues to get comfortable with a new scheme, Brown's defensive unit has given full effort and an increased energy that's noticeable on each play.

With an innovative staff and  condensed playbook, Brown has tried to keep it simple to ensure the team continues to play at full speed without having to think.

The team will conclude spring practice on March 7 with the Spring Showcase at 7 p.m.