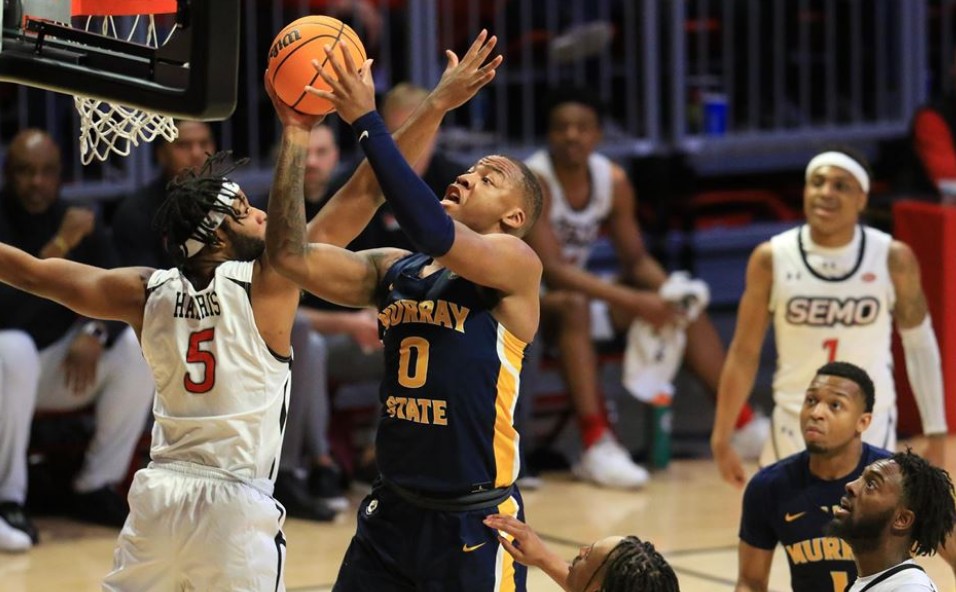 For the ninth time in the 2021-22 season, the Murray State Racers have a Player of the Week honor in the Ohio Valley Conference after KJ Williams won the award for the fifth time when the league announced its weekly winners for the period of Feb. 21-27.

As the Racers became just the sixth team in OVC history to win the regular season title undefeated (18-0), Williams continued to be the catalyst for the Racers. In a home win over Belmont on Thursday 76-43, Williams scored 30 points, marking his third 30-point game this season. In Saturday's win at Southeast Missouri 70-68, he scored 23 points and was a big help as MSU overcame a 12-point deficit in the final 6:38 to get the win and finish 18-0 in league play. In the two games, Williams shot 55 percent from the field (22-of-40) and 50 percent from the 3-point line (5-of-10). He hit all four of his free throws and pulled down 13 rebounds.

The Racers (28-2, 18-0 OVC) are the top seed in this week's OVC Tournament at the Ford Center in Evansville. MSU enters the postseason with the most wins in NCAA D-I and tied with South Dakota for the nation's longest win streak at 18.

The 2022 OVC Men's and Women's Basketball Championships presented by TicketSmarter will be held March 2-5 at the Ford Center in Evansville, Indiana. It marks the fifth-straight year the event will be held at the venue. The Ford Center, which opened in November 2011, is an 11,000-seat arena located in the core of Evansville's downtown district. The 290,000-square foot facility serves as home of Evansville Thunderbolts of the Southern Professional Hockey League and the University of Evansville men's basketball team. The Ford Center also serves as host to numerous sporting events and concerts on an annual basis.

As part of an ongoing commitment to safety and security, aligning with the best practices at major entertainment and athletics venues, there is now a "Clear Bag Policy" in effect at the Ford Center.