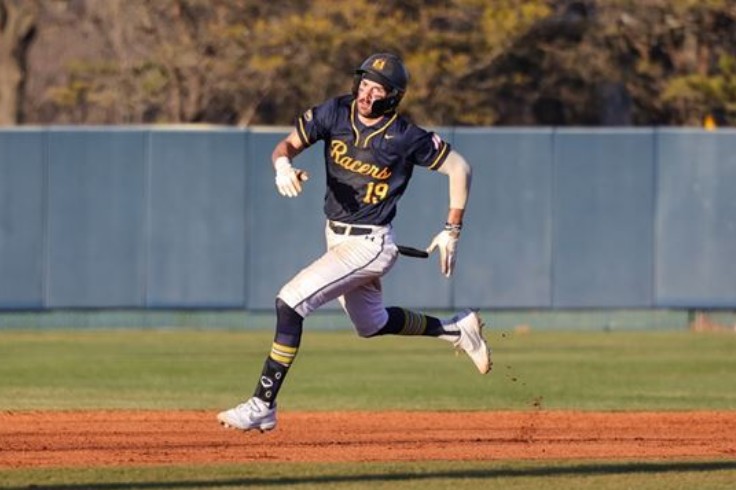 The historic start for Murray State (8-0) baseball continues as the Racers defeated Bellarmine 13-7 on Wednesday at Johnny Reagan Field in Murray, Kentucky. The 2022 MSU team now holds the record for the best start in program history besting the previous record of 7-0 set in 1974 and 1975. Timely hitting and a strong bullpen were key in the Racers come from behind victory over the Knights.

Graduate outfielder Jake Slunder led the Racers offensively becoming just the 15th player in MSU history to hit two triples in the same game. Slunder finished the afternoon going 3 for 5 with two triples, an RBI, a run scored, and a walk on the day, the Cabot, Arkansas native is now batting .432 on the season with 11 RBIs and 12 runs scored.

Jordan Holly provided the clutch gene for the Racers on a bases-clearing double in the eighth inning to extend the Racers lead to six. Holly would finish the night 2 for 4 with two doubles and three RBIs. Drew Vogel and Seth Gardner provided a double each and Brennan McCullough would provide a round-tripper out of the park to right-center field.

The MSU Bullpen played a pivotal role in the Racers win as Allen Roulette, Cade Killingsworth, and Jordyn Naranjo combined for 7.1 innings while allowing just two runs. Naranjo earned the win with three scoreless frames in the seventh through ninth to close out the victory.

Murray State set the new mark for best start in program history with an 8-0 start to the 2022 campaign. Jake Slunder became just the 15th Racer to hit two triples in one game. Murray State has scored at least 13 runs in five of their eight wins and have stolen 27 bases in 29 attempts on the year. MSU has scored 103 runs on the year placing them fourth nationally.

Murray State is back in action this weekend when they travel to Alabama for a three-game series with the Crimson Tide.