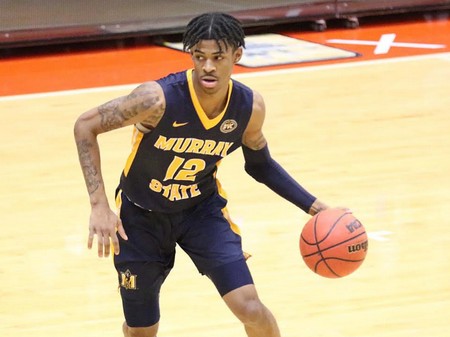 The Murray State Racers saw three players named to the All-Ohio Valley Conference Men's Basketball Team. Ja Morant and Shaq Buchanan were honored as OVC Player of the Year and OVC Defensive Player of the Year and Darnell Cowart was named to the OVC All-Newcomer Team. The OVC arrived at their best-of-the-best list after a vote by the league's head coaches and communications directors.

Much can be and has been written about Ja Morant, but no matter how they write it, the one thing that makes the explosive guard really good, is his consistency. In being named OVC Player of the Year, Morant put on full display a collection of skills that no player before him at Murray State has ever had.

For starters, Morant has only one game this season in which he did not score in double-figures and he has 22 games of 20-plus points, five games of 30-plus and one of 40. In assists, Morant has 16 games of 10 or more.

This skill set is about to make Morant very famous, if he isn't already. He's scoring 24.1 points per game and dishing out 10.3 assists per game. Not since the assist was made an official stat in 1986, has any player in NCAA D-I been able to average 20/10. Morant is tops in the OVC (7th nationally) with 24.1 points per game and tops in the nation in assists per game at 10.3. Morant has topped 300 assists this season and is the just the 14th player to reach that number.

Morant's greatness has created 18 double-doubles this season and a pair of triple-doubles. He has three triple-doubles in his two seasons with the Racers (two this season) and it ties him for the most ever in the OVC. Morant is the 46th Racer to reach 1,000 career points and among two-year players, he is third with 1,076 points as one of only six MSU two-year players to reach 1,000.

Known as a big-time defender when he arrived from the junior college ranks two seasons ago, Shaq Buchanan has been the consummate all-around player. Able to score and defend. His defensive abilities is a big part of why the Racers rank high this season in several NCAA defensive stats including, 3-point defense where they were 37th in the nation and first in the OVC in allowing only 28 percent. MSU's scoring defense (67.7ppg) was tops in the OVC and in the top-100 nationally. Because of team defense and a big help from Buchanan, the Racers had the best scoring margin in the OVC (+16.1ppg) and the fifth-best margin in the NCAA. Buchanan was third in the OVC in steals per game (1.86) and 64th nationally. With 54 steals, he was 60th in the nation and third in the OVC.

The MSU big man underwent an amazing transformation after his arrival on the Murray State campus in the summer 2018. Working hard to get his fitness to the level it needed to be to become a major contributor to the team, Cowart got into the best shape of his life. For the first 22 games of the season, Cowart came off the bench and averaged about 17 minutes per game with 8.7 points and 5.4 rebounds. Since that time, he has started the last nine games and his production soared to 13.9 points and 8.9 rebounds per game. As a starter, Coward hit Eastern Illinois with 23 points and 12 rebounds (Feb. 7) and 22 points and 13 rebounds (Feb. 21) against UT Martin. Cowart has scored in double-figures in the last eight games.

Morant is the 15th Murray State player to be named OVC Player of the Year for a total of 20 awards.

In the last eight seasons, the Racers have seen five MVP awards come their way.

Buchanan becomes MSU's second winner of the OVC Defensive Player of the Year winner, following Jewuan Long in 2012. The award was first given in 2009.