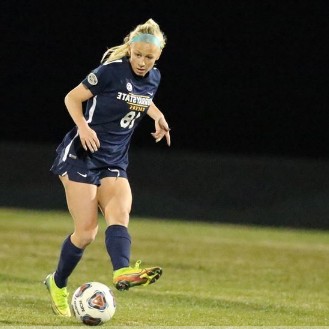 Murray State women's soccer traveled to UT Martin for a clash with the Skyhawks on Tuesday evening. The Racers fell behind in the early stages of the second half, but forced extra time before going on to capture all three points with a 2-1 overtime victory in Martin, Tennessee.

"It's incredible. I told the team after the game that I was disappointed that we conceded a poor goal, and that we have to sharpen that stuff up if we want any chance of winning a championship, but we fought back and were resilient. We got stuck in, digging deep, and we fully deserved to win all three points. I thought Lilly Strader was fantastic and truly deserved her goal. When you have pace up front, I think Kubin, Chloe and Lilly ran their back four into the ground and they got tired, and we took advantage of that," said MSU head coach Matt Lodge.

The contest was scoreless at the halftime whistle, despite the Racers outshooting the Skyhawks 4-3 through the first 45.

UT Martin opened the scoring in the 56th minute when Lotte Koot found the net directly from a corner kick to put the Skyhawks in front.

After Murray State's Lilly Strader was fouled on the edge of the penalty area, sophomore Lauren Payne delivered the equalizer from the ensuing penalty kick to tie the game at 1-1 in the 75th minute.

The Racers continued to press throughout the final 15 minutes of regulation, and outshot the Skyhawks 12-5 in the second half, but it would take extra time to separate the two sides as the match remained level at 1-1 after 90 minutes.

With less than three minutes remaining in the first period of extra time, the Racers found the winner when Abby Jones played Chloe Barnthouse in behind the Skyhawk defense, who slipped it to Lilly Strader for a 97th minute goal to secure the three points on the road.

The Racers recorded 18 shots (11 on goal) to UT Martin's eight (three on goal) as Strader and Payne became the fifth and sixth different players to score a goal for Murray State through just three games on the year.

Payne's goal from the penalty spot is her third career score and her first in the new campaign.

For Strader, the goal is also her first of the season and the second of her career. She posted a career-high seven shots in the victory.

With an assist on the game-winning goal, Abby Jones became Murray State's all-time leader in assists as the junior from Powell, Ohio recorded the 22nd of her career, passing Rebekah Clay (2005-2008) for the most in program history.

The Racers will be back in action on Friday at 1pm when they host Belmont at Cutchin Field.