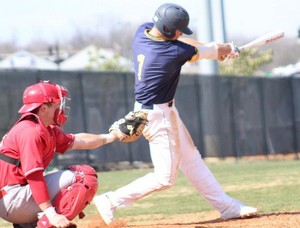 For the second time in three days, Tyler Duke played hero as his walk-off triple, Sunday afternoon at Reagan Field, gave the Racers a 9-8 win over Jacksonville State.

Murray State has now won their first three OVC series as they improve to 6-3 in conference play and 10-13 overall while the Gamecocks fall to 11-13 overall and 3-3 in the OVC.

Duke's triple capped a four-run comeback in the final two innings that started with Wes Schad hitting a three-run home run off the light-post in right-center field to make it a one-run game. Ryan Perkins followed with a triple and Jaron Robinson knocked him in with a sacrifice fly to tie the game and set up Duke's heroics in the ninth.

In the ninth, Sean Darmafall pinch hit to lead off the inning and walked on four pitches before stealing second to put the winning run in scoring position. Duke then hit a fly ball to right that Darmafall went back to second to tag up on, but when the ball kept carrying and eventually hit off the wall and bounced away from the right fielder, Darmafall had to turn on the jets, beating the throw home and scoring the winning run, just as he did on Friday.

Peyton Hayes earned the win as he pitched a scoreless ninth inning after the Racers had tied it up. After allowing an infield single and a wild pitch to put the runner on second with no outs, a running catch by Jake Slunder on the warning track in left kept the go-ahead run from scoring before Hayes finished off the ninth with two straight strikeouts.

The Racers jumped out to an early lead in the first when Brock Anderson hit a sacrifice fly to drive in Duke who hit his first triple of the day to lead off the inning. MSU added two additional runs in the third on two more sacrifice flies by Duke and Anderson to take a 3-0 lead.

JSU came back with four runs in the fourth to take a 4-3 lead, but Jordan Cozart answered with his first home run as a Racer in the bottom of the inning to tie the game.

The Gamecocks retook the lead when they scored two runs in the fifth and two more in the seventh to take an 8-4 lead before the Racers started their comeback.

The Racers only play one game this week, a midweek game at Austin Peay, Wednesday evening. First pitch in Clarksville is scheduled for 6 p.m.