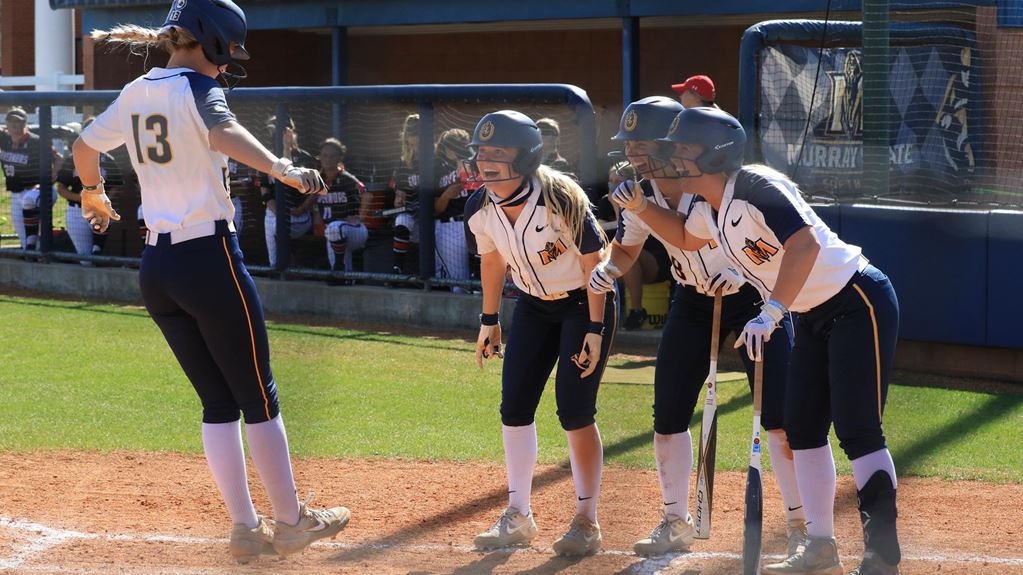 Murray State softball kicked off its six-game homestand with a Battle of the Border doubleheader against Austin Peay on Wednesday afternoon. The Racers picked up right where they left off after sweeping SIUE on the weekend, earning a pair of wins over the Governors on the day with 8-2 and 2-1 triumphs at Racer Field in Murray, Kentucky as MSU improved to 9-2 in the OVC.

"We're starting to settle in and trust ourselves and trust each other…We have a never-say-die kind of attitude right now where we're being gritty, we're playing hard, we're playing together, and it's fun to be a part of," said MSU head coach Kara Amundson.

The Racers meant business from the first pitch of the day, putting up three runs in the opening frame after back-to-back sacrifice flies from Sierra Gilmore and Lindsey Carroll plated a pair, followed by Lily Fischer crossing the plate courtesy of a ground ball off the bat of Lexi Jones as the Racers held a 3-0 lead through one complete.

After Hannah James faced just one batter over the minimum in the next three innings, the Racer offense got back to work in the home half of the fourth.

After Gilmore drove in Jensen Striegel, Lindsey Carroll cleared the bases when she sent a 3-2 offering soaring over the fence in left center as the three-run shot made it 7-0 Racers through four innings of action.

The Governors got one back in the fifth and another in the sixth, but the Racers carried an 8-2 lead into the final frame after Lexi Jones scored Fischer to give MSU a six-run cushion heading to the seventh.

Kamryn Carcich took over for James in the circle in the final inning, and the freshman held the Governors scoreless while recording a strikeout to protect the Racer lead and secure an 8-2 victory in the first game of the day.

James notched the win, dealing six innings while striking out four and surrendering just one earned run as the junior from Nicholasville, Kentucky improved to 3-1 against OVC competition in 2021.

The eight Racer runs came on nine hits, with Logan Braundmeier leading the way with a three-hit performance and two runs scored as the senior reached base four times in the contest. Jensen Striegel (2-3, 2 R, BB) reached base three times and posted a multi-hit performance, while Lindsey Carroll paced the offense in the RBI department with four runs driven in. Carroll's home run is her first of the season and the second of her career.

Additionally, Gilmore's two RBIs give her 101 in a Racer uniform as she passed Ellyn Troup (2010-13) to move into sixth in program history.

The Racers wasted no time in the second game of the day, putting up a crooked number in the first frame once again – this time courtesy of a Lily Fischer two-run home run to left field.

Jenna Veber, who got the nod in the circle for MSU in game two, made quick work of the opposition early on, retiring the first 11 Governor batters in order before Lexi Osowski broke up the no-hit bid in the fourth. She would come around to score on a Kelsey Gross double as APSU cut the Racer lead to a single run.

Veber would allow just four hits the rest of the way to shut the door on any hopes of a Governor comeback effort as the Oswego, Illinois native collected her fourth win of the season behind a complete-game outing that featured three strikeouts without walking a single batter on the day.

Braundmeier, Fischer, and Striegel would be responsible for the three Murray State hits, while Fischer's round-tripper is her second of the season.

The Racers return to action on Friday for a single game to kick off a three-game weekend series at home against Tennessee State.