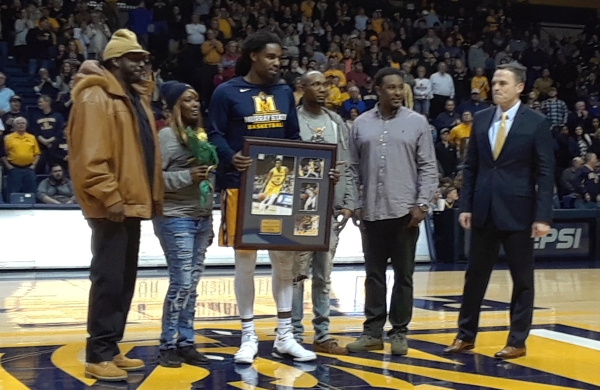 Murray State's Terrell Miller, Jr., is all set to be part of a new basketball event this week in San Antonio, Texas at the first Dos Equis 3X3 National Championship. The three-day event begins Friday at Bill Greehey Arena in San Antonio.

Miller, who recently helped the Racers win their 25th Ohio Valley Conference championship and 16th OVC Tournament title, ended his career at Murray State at the NCAA Tournament when he scored 27 points and grabbed 17 rebounds against West Virginia.

The Dos Equis 3X3 National Championship is Miller's first event as a professional and he'll have a chance at winning part of the $100,000 pool play purse and the $50,000 prize for the team championship.

Miller was offered a chance to play in the event by the Dos Equis 3X3 National Championship Player Selection Committee. The Committee scouted throughout the season to determine the nation's top senior college basketball players who completed their NCAA eligibility. The complete rosters for each conference will be revealed through a series of studio shows streamed live on Twitter once a day from Monday, March 26 through Thursday, March 29. Other OVC players in the event include Austin Peay's Averyl Ugba and Belmont's Amanze Egekeze and Austin Luke. There are 128 players total in the event.

Scoring for the games will be one point for each made shot inside the arc and two points for shots made from outside the arc. The first team to 21 points is the winner or the winner will be decided when the 10-minute time limit has been reached. All games are played by three vs three on a half court.

Isaiah Canaan on his jersey being retired

Kentucky Basketball: Who stays and who goes to the NBA?