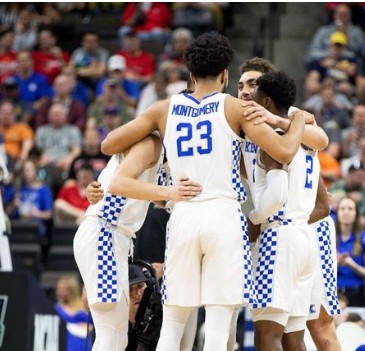 After an opening weekend historically lacking in upsets, the teams left standing make for a compelling Sweet 16 this Thursday and Friday. One of the best matchups of the bunch will be the last one: Kentucky and Houston.

The game between the second-seeded Wildcats (29-6) and No. 3 Cougars (33-3) features a pair of teams in the top 10 of the final Coaches Poll. Houston has the most wins of any team in the country, meaning UK will face its second 30-win team in a row after overcoming Wofford last weekend.

As good as Houston has been all season, the Cougars – hailing from the American Athletic Conference – are likely somewhat of an unknown quantity to most of the Big Blue Nation. To help change that before both teams talk to the media on Thursday, let's take a peek at the matchup from a statistical perspective, leaning heavily on kenpom.com.

So, how do they do it? Well, it's not complicated: forcing opponents into tough shots and contesting them.

Kentucky, meanwhile, is an above average shooting team, but not overwhelmingly so. The Wildcats are 71st in effective field-goal percentage (53.1 percent), 95th in 3-point shooting (35.9 percent) and 72nd in 2-point shooting (52.8 percent).

Based solely on the numbers, it would seem a good bet Kentucky is not going to have a great shooting night Friday. That doesn't mean the Cats can't get the job done on offense. UK has not needed to shoot the ball well to score, which is why its offense is 11th nationally in adjusted efficiency in spite of relatively pedestrian shooting numbers. The Cats do two things exceptionally well: grab offensive rebounds and get to the free-throw line, ranking seventh and 14th in the two measures.

That's where this matchup gets interesting.

Houston has generally been solid protecting its defensive glass this season, ranking 62nd in defensive rebounding percentage. The Cougars have played six games this season against teams that, like Kentucky, rank in the top 10 nationally in offensive-rebounding percentage: LSU, Cincinnati (three times) and South Florida (twice). In spite of winning all but one of those games, Houston allowed them to surpass their season-average for offensive-rebounding percentage four times. Additionally, the one loss came when Cincinnati rebounded 42.9 percent of its misses in the AAC Tournament championship game.

The glass is one potential path to offensive success for UK, but it's not the most obvious one based on this matchup. That would be the free-throw line. Kentucky has made 73 more free throws than its opponents have attempted on the season, outscoring them by 6.7 points per game and ranking 14th in free-throw rate in the process.

Houston, on the other hand, sends opponents to the line more than any other team left standing in the tournament. The Cougars rank 281st nationally in free-throw rate, actually having been outscored on the season from the line. This is an area the Cats should look to capitalize on.

One more item of note. Houston's opponents normally shoot a ton of 3s. To be exact, 41.4 percent of field goals attempted against Houston are 3-pointers. That stands in stark contrast to Kentucky's offense, which tries only 29.5 percent of its field goals from beyond the arc. The Cats have also tried an average of just 11.5 3s per game over their last six outings.

Kelvin Sampson's team gets a lot of attention for its defense – and deservedly so. Houston's offense – lead by the dynamic Corey Davis and Armoni Brooks – should not be ignored.

The Cougars, like Kentucky, are not an elite shooting team, but get the job done anyway. They rank 104th in effective field-goal percentage, 113th in 3-point percentage and 106th in 2-point percentage, yet average 1.13 points per possession and rank 20th in adjusted offensive efficiency.  The reason is Houston protects the ball well (54th in turnover rate) and attacks the offensive glass aggressively, ranking 21st in offensive-rebounding rate.

That's a long-winded way of saying that, with the way both teams are playing late in the season, you should not expect UK to win this game by forcing a bunch of turnovers. Instead, expect UK to try to force Houston into tough shots at the Cats have over the last seven weeks, and then try to finish off stops with defensive rebounds.

Defensive rebounding is an interesting topic with this Kentucky team. This group, in fact, is Coach Cal's best since kenpom.com started tracking in 2000-01 in terms of protecting the defensive glass, allowing opponents to rebound misses only 25.4 percent of the time (52nd nationally). That edges his 2010-11 team, which allowed offensive rebounds on 27.0 percent of opponent misses.

In other words, watch closely when a Houston miss comes off the rim. Who wins that battle could gain a significant edge Friday night.

Neither Kentucky nor Houston will be afraid to run if an open-floor opportunity presents itself, but don't expect those to be too plentiful. Both of these teams generally play deliberately, ranking 274th and 247th in adjusted tempo, respectively. A game played largely in the half-court is most likely.

It's also worth noting that Sampson and Calipari are two of the most conservative coaches in the country in terms of sitting players who are in foul trouble. Houston ranks 344th nationally in two-foul participation, while Kentucky is 347th. If you're unfamiliar with the stat, two-foul participation measures the percentage of time a starter plays after being whistled for two fouls in the first half. So, if a player from either team picks up a second foul before halftime, expect him to ride the bench until after the break.

While UK and Houston are similar in that regard, where they are quite different is in size. As mentioned above, Houston is ranked 271st in average height, while UK is 33rd. Kentucky will be the fourth-tallest team Houston has faced all season after Oregon, UCF and Tulane.

Kentucky's greatest size advantage will come outside the paint. Houston has decent size at the five, with 6-foot-8 Breaon Brady and Brison Gresham and 6-10 Chris Harris seeing most the minutes. At the other four spots, Houston often has no one on the floor taller than 6-5. Additionally, the Cougars' starters at the one, two and three positions are 6-1, 6-1 and 6-3. Houston is well practiced at overcoming a size disadvantage outside, but the Cats will still be looking to capitalize on edge there.

All that adds up to a matchup the likes of which neither team has faced this season. That's the way it should be with an Elite Eight berth on the line.