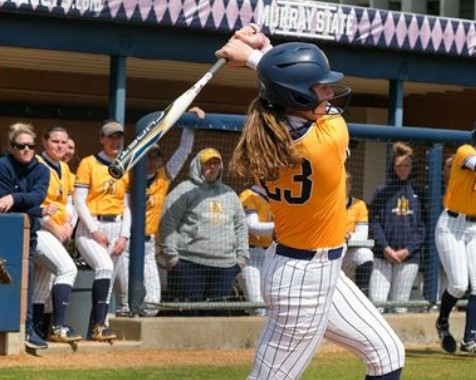 The Murray State softball team extended its current winning streak to a program-record 14 games Tuesday, with a doubleheader sweep of rival Austin Peay, 2-1 and 2-0, at Racer Field in Murray, Kentucky. Currently 24-8 on the season, the Racers are now out the best start in program history.

Pinch hitter Erin Lackey was the hero of the opener, as she singled to right field with the bases loaded and two outs and two strikes in the bottom of the seventh with the Racers down, 1-0. With her single deep in right field, Isabella Wilson scored from third, followed by Jordan Caple from second to give the Racers their first lead of the game and the walk-off win.

Hannah James picked up the win in the contest by allowing no earned runs on two hits with nine strikeouts and no walks over a complete game performance.

In game two, no such heroics were needed as Kamryn Carcich and Jenna Veber combined for a three-hit shutout. Carcich allowed two hits over the first three innings, while Veber allowed only one over the final four innings.

Isabella Wilson scored the only two runs of the game for Murray State, but her two-RBI single in the second proved to be all the offense needed for the win in the finale. Gracie Osbron and Lily Fischer also tallied hits in the game and both scored a run, thanks to the single from Wilson.

This weekend, the Racers will take their 14-game win streak and unblemished OVC record to Eastern Illinois for a three-game series with a doubleheader Saturday and a single-game Sunday.