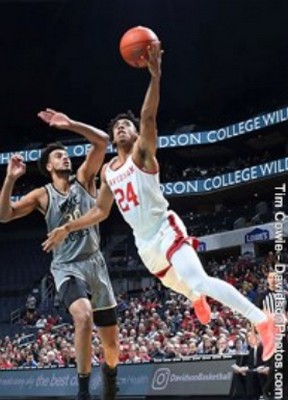 Carter, a 6-3 guard out of Chapel Hill, North Carolina, joins the Racers as a graduate transfer from Davidson and will have one season to play for Murray State.

"We are extremely excited to welcome Carter Collins to Murray State University,&quot; said McMahon. &quot;He is a strong lead guard who has been a very efficient offensive player at Davidson.  Over the past two seasons, Carter has been a consistent double figure scorer, made 75 three's at 37 percent and led his team in assists this year. Carter Collins_Photo by Tim Cowie_DavidsonPhotos.com We are thrilled to add Carter's skills, shooting, experience, and leadership to our program."

Collins scored 10.9 points per game and dished out a team-leading 59 assists during the 2020-21 season. Collins was a 46 percent shooter from the field, 38 percent from the 3-point line and 76 percent from the free throw line. He ranked third in the Atlantic 10 Conference with an assist/turnover rate of 2.23.

Making starts in all of Davidson's 22 games, Collins had four games of 20 or more points, with a season-best 24 points against La Salle. In this Jan. 16 game, he was 10-of-12 from the field, including 4-of-6 from 3-point line. Collins was 7-of-8 from 3-point range (Dec. 11) in a 23-point performance against Georgia Southern. He also tallied 22 points, five rebounds and three assists in wins over both Vanderbilt (Dec. 22) and Rhode Island (Dec. 18).