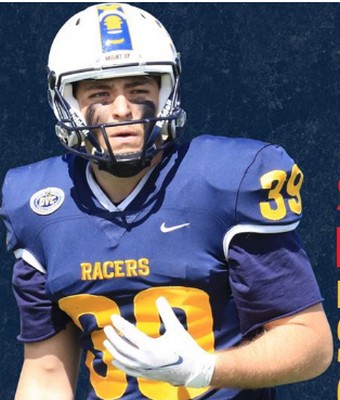 After playing a key role in the 13th-ranked Murray State football team's win over Easter Illinois Sunday, senior kicker Aaron Baum has been named both the OVC and STATS PERFORM National Specialist of the Week, it was announced Tuesday,

Baum played was instrumental in MSU's come-from-behind win over EIU, as he went 4-for-4 on field goals and 3-for-3 on extra points, one of which was a 34-yarder due to a 15-yard penalty on the Racers after a touchdown.

The senior hit kicks from 26, 37, 41 and 58 yards out, with the latter going down as the second-longest in school history. Sunday's 58-yarder gives Baum two 50-plus yarders this season, making him just the sixth Racer in school history to kick two or more field goals of 50 yards or more in their career.

While he did not kick the final PAT of the game, Baum did play a role, as he took a direct snap and tossed the ball in the air to his long snapper Chandler Moody who caught it for the two-point conversion.

On Saturday, the Racers will make the short trip to Clarksville to take on Austin Peay at 2 p.m.