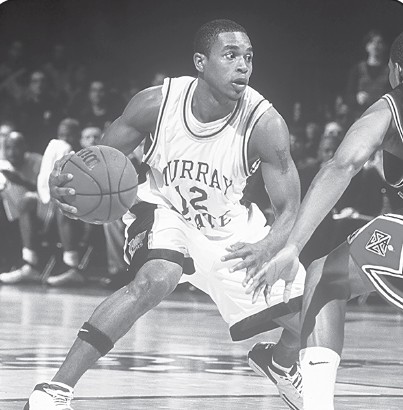 A little more than a week after Murray State was eliminated from the 1998 NCAA tournament head coach Mark Gottfried left to take the head coaching job at the University of Alabama. It took just two days to find his replacement as MSU selected Gottfried's top assistant, Tevester Anderson, to be the 12th head coach in the history of the program.

Anderson was introduced in a press conference held in the brand new Regional Special Events Center, the first event to take place in the facility.

“I'm so thankful and happy this day has arrived,” he said. “I've been around a long time and I've helped a lot of programs. But now this program is in my hands. My goal is to take this program to another level. We not only want to get to the NCAA tournament; we will win and move through it. I assure you of that.”

With Isaac Spencer, Rod Murray, and Duane Virgil back Anderson was confident his front line could match up with anybody.

"I really like what we have up front,” he said. “They were good last year and they've gotten bigger, stronger, quicker, and more experienced. I'm very excited about Isaac Spencer. He had a very good sophomore year and by the end of the season he may have been our best player.”

The backcourt was another matter entirely. When Chad Townsend and De'Teri Mayes graduated the previous spring the Racers lost one of the best guard tandems in school history. Anderson knew he would have to rely on Aubrey Reese and Marlon Towns.

Reese had played sparingly as a sophomore, averaging just 4.6 points. He did shoot well from the floor, 48.9 percent overall and 37.5 percent from three-point range. And he had proven himself to be a solid ball handler.

Towns had played his freshman season at Arkansas and like Reese he had seen limited action. He was a highly regarded high school player though, having been chosen as the top player in the state of Tennessee when he was a senior and one of the top 30 players in the nation. He came to Murray State from Northern Oklahoma College where he averaged 18 points and 15 rebounds and was tabbed by CNN/SI as one the top mid-major newcomers in the nation.

In the opener against Southern Illinois Reese and Towns struggled. Reese scored nine points but was 2-for-7 from the field and 5-for-10 from the foul line. And Towns scored just one point as he missed all seven of his shots from the floor and made just 1-of-3 free throws.

Spencer led the Racers with 16 points. Virgil had 15 and Murray had 11.

With just under five minutes to play SIU led 62-57 and Towns was out of the game, having been taken off the floor on a stretcher after a blow to the head. But Murray State scored the final eight points of the game to win it 65-63.

“It was certainly not beautiful but a win's a win,” Anderson said. “Getting the win was the most important thing. That was our goal.”

It was clear though, that Reese and Towns would have to play better for the Racers to reach their ultimate goal, an OVC championship.

After a victory at Belmont MSU crushed Arkansas-Little Rock 91-66 in the first round of the Sooner Classic as Towns hit 5-of-10 three-point attempts and Reese dished out 10 assists while committing just two turnovers.

But the Racers' guard play was shaky again in a 68-64 victory over Oklahoma in the championship game as their starting backcourt committed 11 turnovers and hit just 6-of-20 shots. Fortunately, they made up for that by outrebounding the Sooners 46-23.

“I'm very happy. I'm just overjoyed,” Anderson said. “I thought if we could control the boards we'd beat this team. Our goals were to outrebound them and outrun them. We could have gone ahead early but some unforced turnovers cost us.”

“We were so confident,” he said. “We knew we could beat this team and we did. Our defense really helped us tonight. Coach Anderson did a good job of setting up defenses to keep them off balance.”

Conference play got under way with a trip to Death Valley to play Morehead and Eastern Kentucky on December 3. And the Racers' guards signaled that they were coming of age with a scintillating performance in a 90-59 victory over the Eagles.

Reese hit 8-of-14 shots and 3-of-6 three-pointers as he scored 19 points. And Towns hit 3-of-4 three pointers and 6-of-7 free throws for 17 points. Murray and Spencer also had big games as they scored 16 and 15 points respectively.

Three more wins pushed the Racers' record to 8-0. And at 2-6 Western Kentucky didn't seem to be much of a threat when they came to town on December 19. Oh, Anderson cautioned that anything can happen in a rivalry game. But his fears proved to be unfounded as Murray State rolled to a 69-57 victory.

Murray and Spencer led the way with 17 points each.

“I knew I played well against them last year,” Murray said. “And I wanted to do the same this year. We all know about the rivalry. But Isaac and I were able to give the team a lift tonight.”

After dropping two-out-of-three games in the Rainbow Classic in Honolulu the Racers returned home and returned to OVC play against Tennessee Tech. Murray led five players in double figures with 14 points as MSU rolled to a 75-53 victory.

“It was a game that I had some concerns about,” Anderson said. “We challenged our guys to suck it up and give a good effort. And they rose to the challenge.”

The win over Tech started a four game home stand for MSU which Anderson said would be crucial if the Racers wanted to win another OVC championship.

“I feel like we need to win all four of these games,” he said. “We need to come in here and take care of business. You don't need any slip-ups at home in this conference.”

Anderson got just what he wanted as Murray State beat Middle Tennessee, Tennessee-Martin, and Morehead to run its record to 14-2 and 6-0 in conference play. Southeast Missouri was also unbeaten in the OVC so when the two teams met in Cape Girardeau on January 14 sole possession of first place was on the line.

With five seconds left Murray State trailed 70-69. Having to inbound the ball under SEMO's basket, Anderson put the game in the hands of his point guard, Reese. The junior quickly made his way downcourt and hit an off balance jumper in the lane with one-tenth of a second left to give MSU a 71-70 victory.

“Coach Anderson just told me to make something happen,” Reese said. “I saw a double-team coming so I just leaned in and I was lucky that it went. I tried to put it at the rim and I was hoping I would get fouled. That was the biggest shot I've ever made in my life.”

"It shows the kind of character Aubrey has to take adversity and deal with it like that,” Anderson said. “I told him to go coast-to-coast with it and the fact that he did it shows he has the heart of a champion.”

The Racers then beat Eastern Illinois on the road 86-73 and returned home to beat Tennessee State 81-71. They ran their record to 18-2 before a record crowd of 8,352 at the RSEC by drubbing Austin Peay 89-58. Spencer led six players in double figures with 16 points and 10 rebounds.

Three more wins pushed Murray State's winning streak to 11 games and its record to 21-2. But the streak ended on February 6 at Tennessee-Martin.

UTM's head coach Cal Luther had announced his retirement earlier in the season. Luther had coached the Racers in the 60's and 70's. And Martin played an inspired game in beating MSU 74-73.

That loss was followed by a 62-51 defeat at St. Louis. So the Racers returned home to play SEMO, having lost two in a row. MSU led the OVC at 13-1 while the Indians were second at 12-2. But Anderson downplayed the importance of the game.

“I think the past two games are pretty much behind us. We're healthy and we've got more energy so I think we'll be okay.”

SEMO led 26-17 in the early going but Murray State ratcheted up the defensive pressure and the Indians were helpless. At halftime the Racers trailed 28-26. At the beginning of the second half they went to a full court press and that keyed a 13-0 run that essentially put the game away as MSU won it 62-52.

The Indians only made five shots from the floor in the second half.

"We would like to have pressed earlier,” Anderson said. “But to do that you have to score and we couldn't score much in the first half. We always talk about coming out and playing well the first five minutes of the second half, and we turned the game around at that point tonight.”

Reese led all scorers with 16 points.

The Racers closed out the regular season by beating Eastern Illinois at home and Tennessee State on the road before dropping their final game at Austin Peay.

Wins over Tennessee Tech and Morehead in the OVC tournament set up a third game against Southeast Missouri in the final.

And just like the first time the two teams met SEMO led by one, 61-60 with just over five seconds to play. In a scene right out of the movie Hoosiers, Anderson initially called a play for someone other than Reese who had beaten the Indians on a last second shot a month earlier.

“We were considering a different play because the first time against SEMO we had Aubrey drive the floor,” Anderson explained. “But he said, 'Coach, I'll get it for you.' So we gave him the ball again. When you want a big play, Aubrey is the man to get it for you.”

Reese streaked down the floor and lofted an off-balance runner over SEMO's 6-10 center Bud Eley as time expired. And he hit it again, giving MSU a 62-61 victory.

“I was thinking shot all the way,” Reese said. “I didn't have a lot of time to think about what I was going to do. I didn't worry about who was on me. I was just thinking about making the shot.”

Reese and Virgil led MSU with 16 points apiece. Spencer had 15 points and 14 rebounds.

Spencer and Reese were named first team All-OVC and Murray was a second team honoree. Anderson shared the Coach of the Year award with SEMO's Gary Garner.

The Racers went on to play Ohio State in the NCAA tournament, dropping a 72-58 decision. They finished the season with a 27-6 record, a regular season OVC Championship and an OVC Tournament Championship.