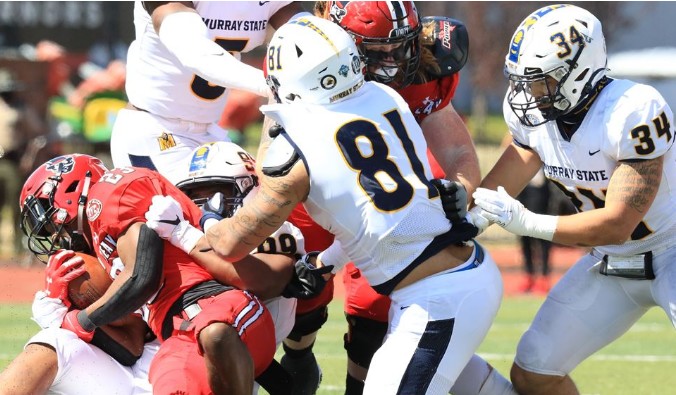 The 16th-ranked Murray State football team will host 10th ranked Jacksonville State Sunday for what will be the biggest game to be played at Roy Stewart Stadium in nearly two decades. Kick-off at The Track is scheduled for 2 p.m., with the game being aired on ESPN+ and Froggy 103.7 FM.

After a convincing win over EIU last week, No. 10 Jacksonville State will come into Sunday's match up at 8-2 overall and 5-1 in league play. Sunday will serve as a de facto OVC championship game as both teams enter the season finale tied at the top of the conference standings with a 5-1 record.

The Gamecocks currently allow 18.1 points per game on 266.5 yards per game, while scoring 27.8 points on 388.2 yards. JSU currently leads the OVC in both total and scoring offense and defense. In addition to leading the league in the four major categories, they also boast the nation's ninth best rush defense, allowing just 86.3 yards per game against the run.

On offense, Zion Webb has served as QB1 for JSU this spring season, averaging 142.8 passing yards and 27.9 rushing yards per game with 10 touchdowns and seven interceptions. Josh Samuel and Uriah West have split the running duties for Jax State this season with 67.7 and 53.3 yards per game, respectively, with six touchdowns for Samuel and five for West.

It All Comes Down To This

Sunday will serve as a de facto OVC championship game as both teams enter the season finale tied at the top of the conference standings with a 5-1 record. The last time the Racers hosted a game with the league title on the line was in 2002 against Eastern Illinois. Murray State won that game, 37-35, thanks to a last second field goal from Shane Andrus.

The Murray State offensive line has allowed just two sacks this season or 0.3 per game. Should that hold, it would be a new program record and would mark just the third season in MSU history in which a team has allowed an average of less than one sack per game. The number is all the more impressive when compared to last season in which the Racers allowed 2.3 per game and 2.7 in the last five years combined.