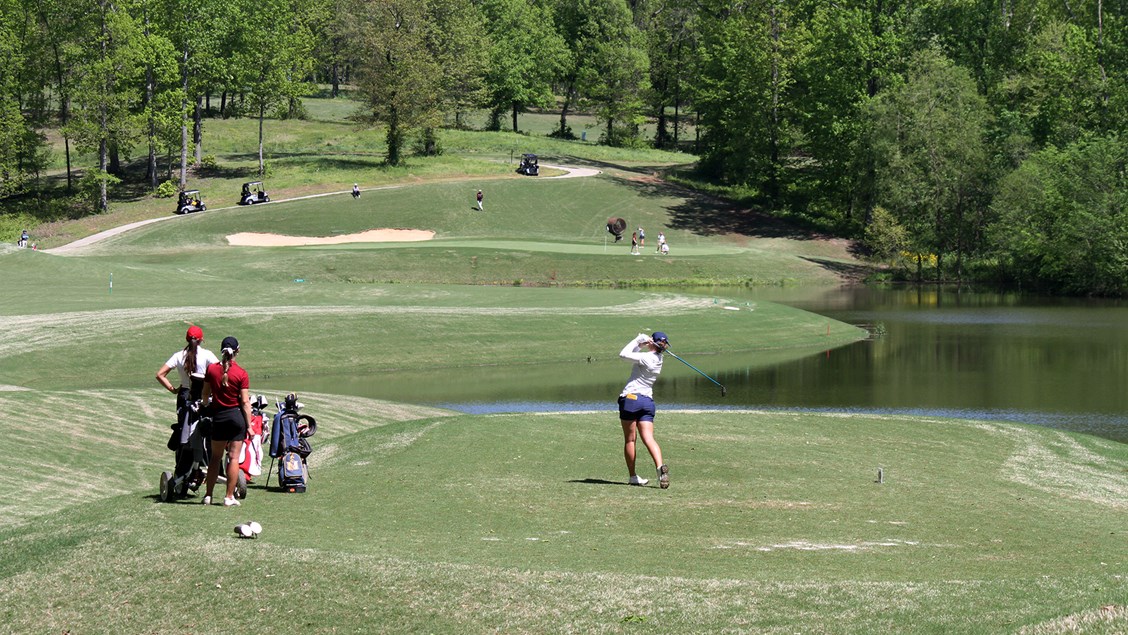 Two-time defending champion Murray State is the leader after Day One of the 2019 OVC Women's Golf Championship.

The OVC Championship is being played at The Robert Trent Jones Golf Trail at The Shoals in Muscle, Shoals, Alabama. The course is playing a par 72 with yardage running 6,025 yards for the women's teams.

Individually, Murray State senior Linette Holmslykke and Jacksonville State senior Paula Vega are tied for first place after opening round scores of 71 (-1). They are a shot ahead of Murray Stateĺs Jane Watts, who is one ahead of a quartet of golfers including teammate Anna Moore, Belmontĺs Maribeth Peevy, Eastern Kentuckyĺs Ragga Kristinsdottir and Elsa Moberly.

In addition to putting three players in the top four overall, Murray State has got a round of 75 from Raeysha Surdendran, who is tied for 11th after a score of 75.

Jacksonville State, who is looking to win its first title 2012, was led by Vegaĺs round of 71. Two other golfers enter Tuesdayĺs second round tied for eighth place in Claire Vermette and Pia Ohlenbusch, who had identical rounds of 74 (+2).

Moberly and Kristinsdottir set the pace from EKU, with freshman Bailey Hubbard tied for eighth after an opening round of 74.

Peevy is in fourth place for Belmont, while teammate Cameron Fish is tied for 11th after a round of 75 (+3).

Meghann Stamps opened this yearĺs Championship with a round of 75 for Austin Peay; she is tied for 11th after 18 holes.

Tennessee Tech teammates Shelby Johnson and Arianna Clemmer are tied for 15th place after opening round scores of 76 (+4).

Morehead State was led by Gypsie Hutchinson who had a six-over round of 78 and is currently tied for 24th place.

Morgan Rood and Savannah Szozda each had rounds of 82 (+10) for Tennessee State and are tied for 32nd place.

Eastern Illinois was paced by Daphne Changĺs round of 81 (+9) which puts her in 31st place.

The OVC Women's Golf Championship will continue with 18 holes of second round action on Tuesday. The action starts at 8:00 a.m. CT and live scoring can be accessed through links at OVCSports.com.