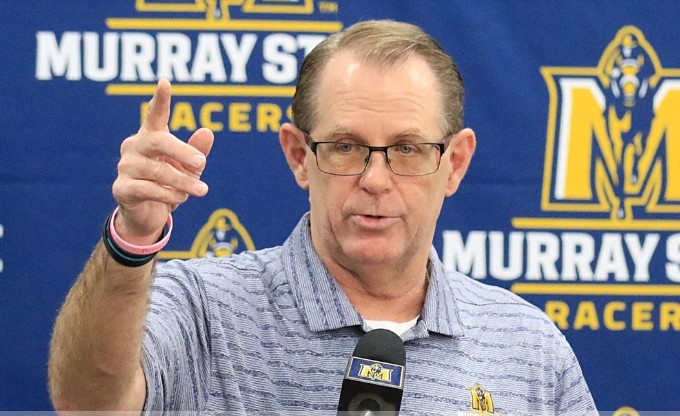 After one of the most successful seasons in over two decades, the Murray State football team took home a bevy of postseason awards, as announced by the OVC Thursday. First year head coach Dean Hood led the way by being named as the 2020 Roy Kidd OVC Coach of the Year, while the Racers themselves placed 13 student-athletes on the two All-OVC teams, in addition to two players on the All Newcomer team.

Hood oversaw one of the best turnarounds in the nation this spring when he led Murray State to its first winning season since 2011 and best OVC record since 2005. His Racers started the season at 5-0, tying the 1995 team for the best start in school history. Murray State also returned to the  top 25 polls under Hood this season, earning its first ranking since 2011 and staying in the polls for six consecutive weeks.

The first-year head coach is the fourth Racer skipper to earn the honor along with Bill Furgerson, Mike Gottfried and Houston Nutt, who earned the accolade twice. In addition, he is now the second OVC coach to win the award at two different institutions. Hood, who earned his first accolade in 2008 at Eastern Kentucky, joins Boots Donnelly who won the award at Austin Peay and Middle Tennessee.

Overall, seven players were named to the first team, while six earned second team honors. The 13 total All-OVC picks for MSU this season are the second-most in program history, behind only the 15 selections from 1995.

Jacob Vance and Levi Nesler earned first-team nods as offensive lineman after a season in which the Racer line went from averaging 2.7 sacks allowed per game over the past five seasons, to just 1.0 this year. Wide receiver LaMartez Brooks joined Vance and Nesler on the first team by pulling down 37 catches this season 429 yards and two touchdowns. Malik Honeycutt earned the second All-OVC honor of his career by being named to the first team as a punt return specialist. Honeycutt averaged 11.2 yards per return this season for MSU, with a long return of 48 yards.

Defensively on the first team, inside linebacker Eric Samuta led Murray State on the year with 64 tackles, 5.0 tackles for loss, a fumble recovery and a pick-six. Cornerback Marcis Floyd also had a pick-six on the year in addition to 32 tackles, three interceptions, nine pass breakups and two forced fumbles. Outside linebacker Scotty Humpich rounded out the first teamer for MSU this season, earning the honor for tallying 24 tackles, 4.5 tackles-for-loss, 2.0 sacks and five hurries.

In addition to the seven first-team picks, MSU placed three Racers on the defensive second team and three on the offensive. Quarterback Preston Rice adapted to Hood's new offense with ease, as he passed for nearly 1,300 yards on the year and nine touchdowns, plus an additional six touchdowns he ran in himself. Running back Damonta Witherspoon has shown the OVC that his future is bright as rushed for 513 yards over seven game and scored five touchdowns as a true freshman. Jacob Bell had a breakout season at receiver for Murray State totaling 305 yards on 21 catches with one touchdown and 69 yards rushing.

Inside linebacker Alec Long finished the season with 61 tackles, the second-most on the team, in addition to 1.5 tackles-for-loss and 1.0 sacks. Izaiah Reed was another Racers to step-up this season as he tallied 4.5 tackles-for-loss, a team-high 3.0 sacks and one hurry. Defensive end Ethan Edmondson had a big debut season for MSU as he amassed 26 tackles, 5.0 tackles-for-loss, three pass breakups, three hurries and an interception. In addition to their second team nods, both Witherspoon and Edmondson were also named to the OVC All-Newcomer team.