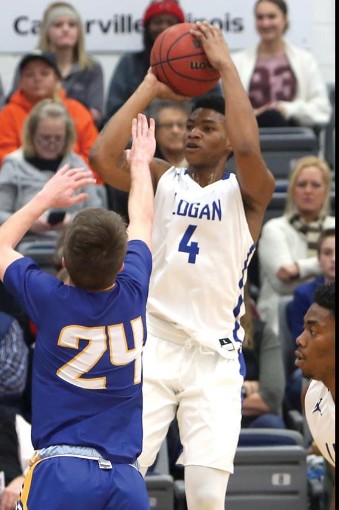 Eaves, from Madisonville, Kentucky, will be a junior for the Racers in the 2018-19 season.

"We are thrilled to welcome Jaiveon Eaves to the Murray State family," McMahon said. "Jaiveon had an outstanding sophomore season at John A. Logan earning 2nd-Team All-American honors. We love his ability to score the ball in a variety of ways, his consistency from behind the 3-point arc, and his toughness at the defensive end of the floor. I'm excited about what Jaiveon brings to our team and look forward to coaching him beginning this summer."

Eaves had a tremendously productive sophomore season at John A. Logan in scoring 16.1 points per game and grabbing 4.7 rebounds on a team that was 26-6 and won the Great Rivers Athletic Conference regular season championship and ended the season No. 22 in the nation. Eaves hit 48 percent from the field overall and was 44 percent from the 3-point line (65-of-148). He had six games of 20 points or more and had a season-best game of 33 points against West Kentucky Tech when he was 8-of-9 from the 3-point line. Eaves was honored as a National Junior College Athletics Association Second Team All-America after he was named the NJCAA Region-24 Player of the Year and the GRAC Player of the Year.

"He was outstanding by any definition," said John A. Logan coach Kyle Smithpeters. "Jaiveon came in with 13 new players and did a great job of establishing himself as a hard worker and team leader. He had a teacher's mentality, in that he wanted guys to buy in and improve. We have a lot of players come through, but there aren't many that have pulled the reigns like he did. We had six players score double-figures and he didn't hunt for shots, he just wanted to win. Jaiveon has one of the quickest releases that I've seen and I was very happy that he took a lot of pride in his defense. He was the first one in the gym, last to leave. It's hard not to be successful when your leading scorer exhibits those type of characteristics."

Eaves played his prep basketball at Madisonville-North Hopkins High School where he led the Maroons with 19.4 points per game and was named KHSAA Honorable Mention All-State during his senior season of 2015-16. He was a four-time All-Region II selection and scored more than 1,600 points in his career.

Jim Phillips: One of the Racers' first stars