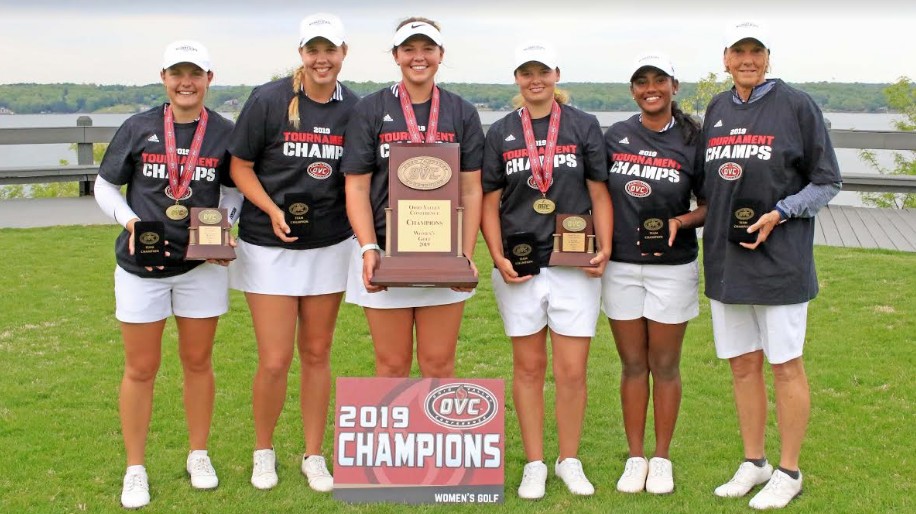 The Racers led by three shots after day one and five shots after the second round before breaking it open on the final day to top Eastern Kentucky by 20 shots. That marked the biggest victory in the OVC Championship since 2008 (when JSU won by 21 shots).

With the victory, Murray State earned the OVC's automatic bid into the NCAA Championship. The 2019 field will be announced on Wednesday, April 24 on the Golf Channels' Golf Central program at 4:30 p.m. CT. The NCAA Regionals will be held May 6-8 and take place in Auburn, Alabama, Cle Elum, Washington, East Lansing, Michigan and Norman, Oklahoma. Following the Regionals the National Championship will be held May 17-22 at Blessings Golf Club in Fayetteville, Arkansas.

After equaling the all-time tournament low round score on Tuesday (6-under, 66), Murray State senior Anna Moore fired an even par round of 72 to finish the tournament at 211 (-5) and capture the medalist crown by one shot. Moore’s win marks the ninth time that a Murray State golfer has captured the OVC Championship medalist honor and first since Moa Folke repeated 2017.

Following the Championship, Murray State senior Linette Holmslykke was voted OVC Player of the Year by the league head coaches. The All-OVC selection has a 72.9 scoring average for the season over 11 events, including finishing second at the OVC Championship. It marks the ninth time a Murray State golfer has been named OVC Golfer of the Year and first since Moa Folke in 2017.

Murray State had four of its five golfers finish in the top seven overall, with Moore (-5), Holmslykke (-4) and Watts (+3) earning All-Tournament honors and Raeysha Surendran finishing seventh (222, +6). The Racers final round score of 284 established a new OVC Championship record, breaking the mark of 286 MSU and Eastern Kentucky set in 2017. Overall MSU had a 54-hole average of 288, which also established a new OVC Championship mark (breaking the old record of 288.67 set by MSU in 2017).