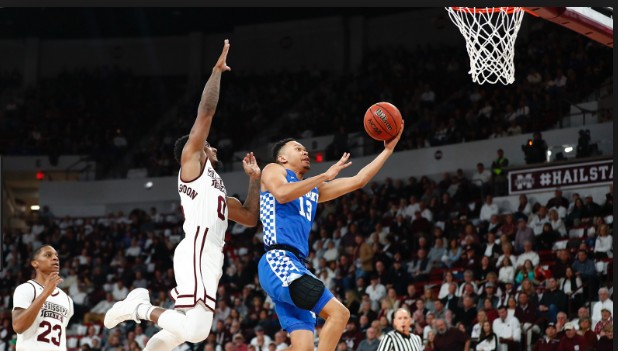 4/18/19 - Kentucky men's basketball redshirt freshman guard Jemarl Baker Jr. will transfer from the University of Kentucky. Baker notified Kentucky of his decision on Wednesday and will have the ability to transfer to any school without any restrictions, per NCAA rules.

"I want to thank the Big Blue Nation for supporting me during my two years at Kentucky," Baker said. "You are truly the best fans in the country and I've enjoyed my time here wearing the Blue and White.

"However, after talking with Coach Cal, the staff and my family, I feel it's in my best interest to continue my academic and basketball career elsewhere. I've made life-long relationships with my brothers and the staff at Kentucky and have improved so much as a player. I'm thankful for the opportunities it's given me to be a part of this historic program."

Baker appeared in 28 games during his redshirt freshman season with 64 points, 15 rebounds, 12 assists and 13 3-pointers. Known more for his ability to spread the floor with his outside shot, he earned his way on to the court this season and became a key reserve because of his ability to defend.

The Menifee, California product made a solid impact in 2018-19 after missing the 2017-18 season with a knee injury. He missed the first eight games of the season but made his debut vs. Seton Hall and appeared in every game but one from that point forward.

"We haven't had many players leave us but in all cases we stay in touch and continue to try to help," UK head coach John Calipari said. "In Jemarl's case, his injury in his first year and even the early part of this year set him back a little bit, but I still believe he's an impact player who can score and defend. He's a better defender than people give him credit for, and we knew we could play him this season in any situation because we knew he was always going to defend. I appreciate everything he did for this program. Like any kid that leaves us, I'll be watching his career from afar. We'll always be here for him."

Baker played his best basketball late in the season. He had three straight games with career-high scoring performances from March 21 to March 29, including eight key points in the win over Wofford in the second round of the NCAA Tournament. Baker made three crucial free throws and a 3-pointer to halt Wofford's momentum and lead the Wildcats to a win.

He also recorded seven points in a career-high 24 minutes in the opening NCAA Tournament game vs. Abilene Christian and scored six points with a 3-pointer in the Southeastern Conference Tournament semifinal win over Alabama.

Baker joined Kentucky as a consensus four-star prospect out of Eleanor Roosevelt High School in California. The 6-foot-4 guard averaged 17.1 points, 4.1 assists and 3.5 rebounds per game as a senior and led Roosevelt to its first-ever state title. He hit 94 total 3-pointers during his senior campaign.