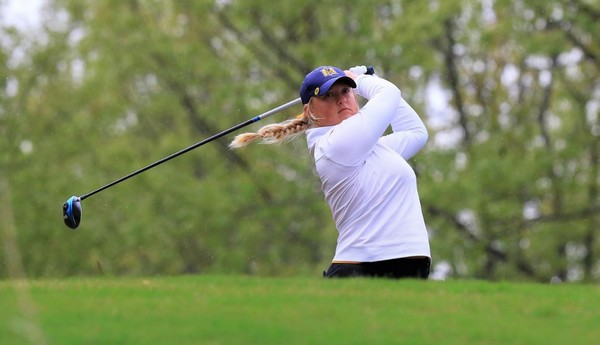 Payton Carter had a share of first place and the Murray State women's golf team a share of second place after the first round of the 28th Ohio Valley Conference championship at the Shoals Golf Club in Muscle Shoals, Alabama.

Taking on the Shoal's Fighting Joe course, the Racers carded a first round 299, as did Belmont, and trailed leader Austin Peay who posted a 295. Tennessee Tech (305) and Morehead State (307) made up the rest of the top-5.

Carter, a junior, shared the first-round individual lead with Austin Peay's Erica Scutt, each with a 1-under-par 71 as the only players in the field of 33 players to break par on the Shoals' Fighting Joe Course.

Other Murray State scores and places included Ana Picchi in third place after a 73, while Eliza Mae Kho was in 15th place on a round of 77. MSU'sEliza Mae Kho Emmie Eriksson posted a 78 and had a spot in 18th place and Alma Garcia's 85 was good for a spot in 27th place.

Round two for the Racers begins Tuesday morning at 9:22 a.m. with MSU paired with APSU and Belmont.

Carter's 71 featured 11-straight pars before she made her first of two birdies at the par-5 12th hole. Her 71 ties her career-low round as a Racer after she also carded 71s three other times in the last two seasons.

MSU's 299 is their best team score since a 299 a year ago at the Shoals Schoolmaster Course.

At Saturday's awards gathering, Murray State's Payton Carter and Ana Picchi were named to the All-OVC Team and Alma Garcia to the OVC Newcomer Team.