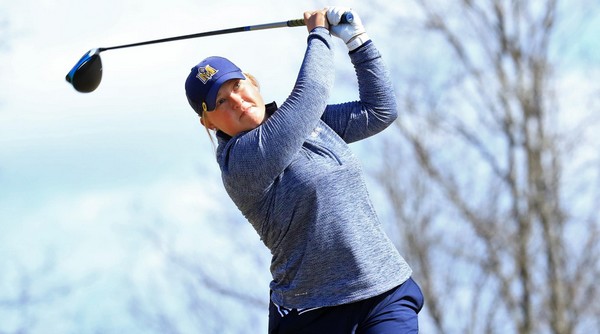 Payton Carter birdied four of five holes in Monday's second round to take the lead at the 28th Ohio Valley Conference championship at the Shoals Golf Club in Muscle Shoals, Alabama.

The junior from Henderson, Kentucky, carries a 2-shot lead into Tuesday's final round at the Fighting Joe Course after posting two excellent rounds in difficult weather conditions. Her score line of 71-70 has produced a 3-under 141 for a two-shot lead over Morehead State's MacKenzie Neal who carded scores of 73-70=143.

Carter tries to become the eighth Racer to win the OVC medalist championship and the first since Anna Moore in 2019.

In windy and cold conditions, Carter overcame a double-bogey on the No. 7 hole with four birdies in five holes on the back nine. Her birdie binge included three-straight on holes 11 through 13 and another at the 15th. Carter made a bogey at the 17th and par at the last for a 37-33 day for a 2-under par 70.

The final round for the Racers begins Tuesday morning at 8:40 a.m., paired with Tennessee Tech. Payton Carter hits her first shot of the day at 9:12 a.m.