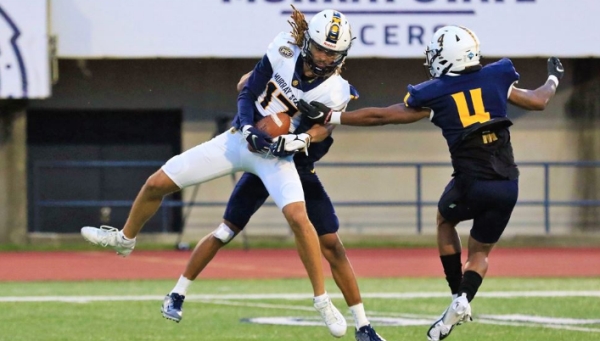 Fans in attendance got to see the Racers for one final team before the team departs for summer break. In addition, the Murray State cheer team and the legendary Racer I also made appearances.

The defense seemed smothering at times Thursday, as the "blue team", as they were known Thursday, made several fourth down stops and recorded multiple sacks. The two biggest highlights of the night were an interception in offensive territory by Davonta McKee and a pick-six from veteran Quinaz Turner.

"I think it was just the mentality of our guys tonight," said defensive coordinator Dillon Sanders on what he thought helped his team pick up the win. "In the last scrimmage, the offense kicked our butts a little bit, especially up front. So, I think the mentality of the defensive line really set the tone for us. The linebackers played hard, the defensive backs made a bunch of plays. I think that our older guys that have been in this arena before knew what it took to show up and play to our standard today."

While the offense fell short Thursday, the white/gold team definitely had its moments. DJ Williams found Jacob Bell from 60-plus yards out for a touchdown and Aaron Baum hit a 49-yard field goal. After the official scrimmage ended, the Racers continued to work situationally and that's when newcomer Kylan Galbreath broke off a 75-yard plus run for a touchdown.

Thursday's scrimmage officially ended the spring practice season for Murray State, as it now turns its attention to the fall. The team will now have some time for rest and recover before reporting to fall camp at the end of the summer.

On Sept. 3, Murray State will officially launch its 98th season off collegiate football when it kicks off in Lubbock at Texas Tech. One week later, on Sept. 10, the Racers will open their 50th season at historic Roy Stewart Stadium when they welcome former OVC foe Jacksonville State. Two weeks after its tussle with a past OVC rival, Murray State will begin its 75th and final season in the Ohio Valley Conference when it hosts Eastern Illinois for Family Weekend. On July 1, 2023 the Racers will leave the league it helped found and embark on a new journey to the Missouri Valley Football Conference, the nation's premier FCS conference.

Season tickets for the 2022 football season are on and available for purchase by calling (270) 809-3000. This year's season ticket packages include five exciting home games including the annual Family Weekend, Homecoming and Hall of Fame/Senior Day games.

The Story of the Savannah Bananas