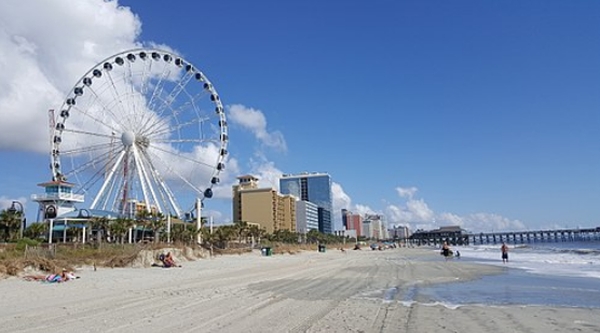 As the Murray State Men's Basketball team builds their 2022-23 schedule, a strong multi-team event is nearly always on the docket. The Racers have accepted an invitation to the fourth annual Myrtle Beach Invitational andMyrtle Beach Invitational Logo play three games in four days (Nov. 17, 18 & 20) at HTC Center in Conway, South Carolina, on the campus of Coastal Carolina University.

The Racers, who played and won a game in March in the NCAA Tournament are joined in Myrtle Beach by a strong field of teams including two other NCAA teams, Boise State and Loyola Chicago. NIT participants Texas A&M and Colorado are also in the field as are Charlotte, UMass and Tulsa.

New Murray State head coach Steve Prohm is in his second era with the Racers and guiding them to the Missouri Valley Conference where MSU joins the league July 1. While restocking the roster, Prohm also announced this week that his coaching staff is complete.

All games of the 2022 Myrtle Beach Invitational will be aired live on ESPN's platform of channels.

Murray State Coach Steve Prohm won a tournament title once before at HTC Center when he coached Iowa State to the 2017 Puerto Rico Tipoff crown. The event was moved to the Coastal Carolina campus due to Hurricane Maria.

The last time the Racers won an in-season tournament was in Prohm's first season as MSU coach in 2011 at the Great Alaska Shootout. The Racers defeated Southern Miss. In double overtime in the championship game.

In Myrtle Beach, the Racers could meet Colorado and if they do, it will get Coach Prohm and Buffs Coach Tad Boyle together again. The two coached against each other in the title game of the Charleston Classic in 2012, won by Colorado 81-74.