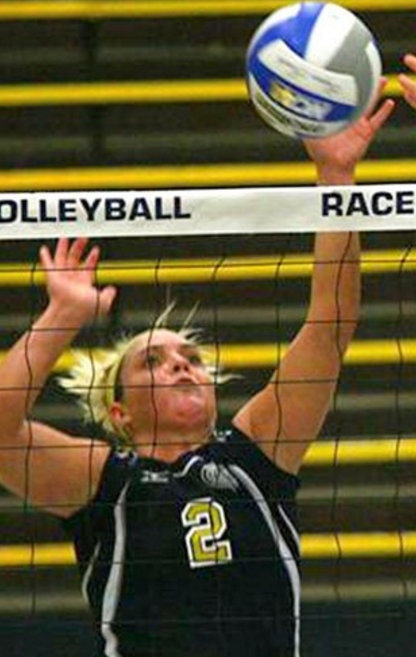 Digging a volleyball is like trying to hit a 95 mile-an-hour fast ball. And there's no strike zone. It requires incredibly fast reflexes, the willingness to sacrifice your body and studied anticipation.

In fact, it's so demanding that almost no one would construct a team whose calling card was it's ability to get to a ball a tenth of a second before it hits the floor. There are, after all, easier, flashier ways to win.

Conventional wisdom would dictate recruiting tall girls who can smack the ball with tremendous force. But that's not the path Murray State University's head volleyball coach Dave Schwepker took when he assembled his current group of players.

He went for the cat-quick types who it seems could snatch bullets out of the air. And one of quickest of the quick is junior outside hitter Alison Mugler.

Mugler grew up in Maumee, Ohio, a suburb of Toledo.

“We actually moved from the city when I was about five,” she recalled. “When my parents were looking at houses I told them I didn't like any of them because I didn't want to move. But it worked out fine. I ended up attending the same grade school. I just took a bus.”

Mugler started playing volleyball when she was nine although she didn't make the traveling team she tried out for that year because she was too young.

“When I was playing in youth leagues my mom always bought me extra large jerseys that came down to my knees. I was kind of a chunky kid. But even to this day they don't fit.”

“He was an excellent coach,” she said. “I have known him since I was about 10 years old and he was one of the reasons I picked St. Ursula. Volleyball was kind of a tradition there.

"My assistant coach at St. Ursula, Marlene Metti, used to be an assistant here. She introduced me to Murray State.”