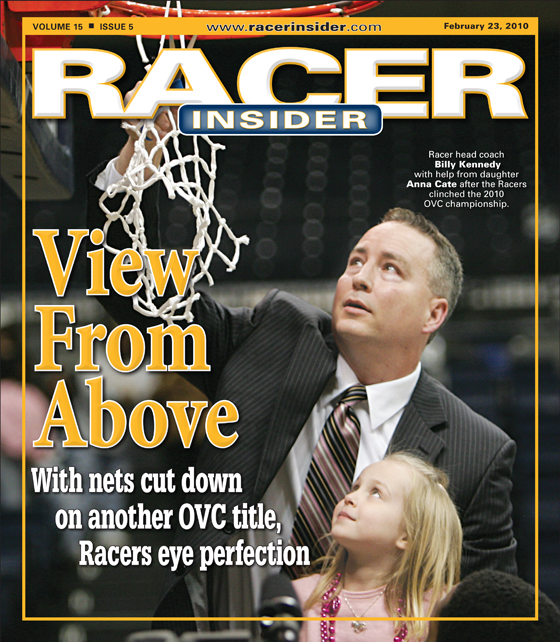 Murray State Basketball announced plans for Racer Hoopalooza 2019 when the amazing team from the 2009-10 season won 31 games and posted one of the most memorable upsets in NCAA Tournament history when the Racers beat Vanderbilt in San Jose.

"Having just completed an incredible decade of Murray State basketball, we are looking forward to celebrating one of the greatest teams in Murray State history at Racer Hoopalooza 2019," said MSU Coach Matt McMahon. "This upcoming season marks the 10 year anniversary of Coach Billy Kennedy's 2009-10 Racer team that won 31 games, an OVC championship, and in dramatic fashion, recorded the second NCAA Tournament win in program history.  Racer Hoopalooza will be a special event reuniting this historic team with our great fans here at Murray State.  We want to invite all of Racer Nation to join us August 2nd and 3rd for a memorable weekend in Murray, Kentucky."

All former Murray State coaches, players and managers are invited back to campus to celebrate the program (Aug. 2-3). The amazing fans of the Murray State Racers are also invited to be part of the reception and dinner on the first night (Aug. 2) at the CFSB Center and a golf scramble and pick-up basketball games the second day (Aug. 3).

The event is open to all fans. Call the CFSB Center ticket hotline at (270) 809-3000 or email msu.tickets@murraystate.edu. The cost is $75 per person for the Friday night reunion and banquet. The cost is $65 for an individual player for the golf scramble and $250 for a team. The golf scramble will be held at Murray Country Club.

All former Murray State players, coaches and managers should contact Coach Matt McMahon for special pricing and to confirm that they are attending.

The 2009-10 Murray State men's basketball season was a very special one indeed. Best known for Danero Thomas' buzzer beater that took down the Vanderbilt Commodores 66-65 in San Jose, California, the Racers' NCAA Tournament win was the second in program history at the time and came 22 years to the day after the first one against North Carolina State in 1988. The Racers were a No. 13 seed that day and Vandy was a No. 4 seed.

The Architect of this run for MSU was head coach Billy Kennedy. The 31-5 record was the most wins in MSU's 85 college basketball seasons passing the previous best of 29 by the 1997-98 team. It also set the record for most single-season wins (17) in Ohio Valley Conference history. MSU's 17-game win streak was the longest in the nation during the season as the team went 64 days without a loss.

Racer Hoopalooza was first held in 2013 as former coach Steve Prohm (now at Iowa State) brought the idea to life. Coach Prohm had a vision to create a reunion event that would spotlight the championship tradition at Murray State, the elite players and coaches that have passed through, and the amazing fan base we call 'Racer Nation'.