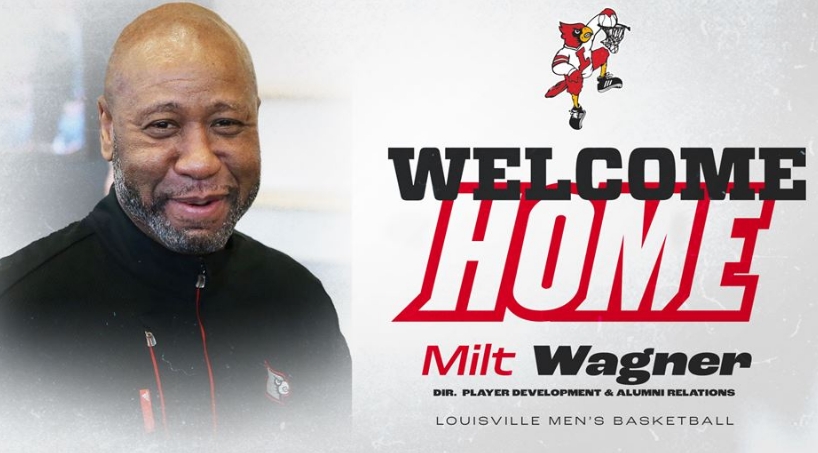 Milt Wagner, a top ten career basketball scorer for the University of Louisville whose honored jersey hangs in the KFC Yum! Center, has joined the Cardinals' men's basketball staff as Director of Player Development and Alumni Relations under head coach Kenny Payne.

"I'm so excited for this opportunity to have my brother Milt "Ice" Wagner with me every day to help me build the championship culture I'm trying to establish," said Payne, who was a teammate of Wagner when the Cardinals won the 1986 NCAA Championship.  "He is truly one of the most beloved Cardinals of all time both by the fans and by his teammates and our former players. Milt is another great hire that comes with an NCAA championship and an NBA title with the Los Angeles Lakers.  I'm sure our Card fans will welcome home your own Ice Man in Milt."

One of the most prolific scorers in UofL history during his career from 1981-86, Wagner ranks sixth all-time in scoring with 1,834 career points. A starter on the Cards' 1986 NCAA Championship team,

UofL reached three NCAA Final Fours (1982, 1983, 1986) and participated in the NCAA Sweet Sixteen in all four of his playing seasons.  He redshirted the 1984-85 season after suffering a broken foot in the second game of the season.

"It's an honor for me to return to my alma mater and work alongside my brother Kenny Payne," said Wagner.  "Louisville is my second home and I've always wanted to return here to work with this historic program that I contributed my blood, sweat and tears for as a student-athlete.  I'm thrilled to be here with a terrific staff and help this program achieve at the highest level."

The three-time All-Metro Conference selection ranks ninth in career assists (432) and 10th in career free throw percentage (.814, 336-of-413).  Wagner helped the Cardinals achieve a 113-32 record, three Metro Conference regular season championships and two Metro Conference Tournament titles. He played in 144 career games — tied for the second most in UofL history — and started the last 111 games in which he played.  He averaged 14.8 points and a team-high 4.2 assists on the Cards' 1986 NCAA Championship team.

He was one-third of Louisville's "Camden Connection" on the Cardinals' 1986 championship team, a trio of former Camden (N.J.) High School players that also included Billy Thompson and Kevin Walls.  His No. 20 jersey is one of the select honored jerseys which hangs in the KFC Yum! Center as one of the Cardinals' all-time great players and he was inducted into the UofL Athletics Hall of Fame in 2004.

Wagner was selected by the Dallas Mavericks in the second round of the 1986 NBA Draft with the 35th overall pick and played professional basketball for 13 years in various professional leagues.  He was a member of the 1988 NBA Championship Los Angeles Lakers, as well as the Miami Heat during the 1990-91 season.  He also played abroad for pro teams in Israel, Paris France, Belgium and Germany.

Following his professional playing career, Wagner served as coordinator of basketball operations at Memphis for six seasons (2000-06) under head coach John Calipari and helped the team earn 148 victories and six straight postseason appearances, including the 2006 NCAA Tournament Elite Eight.  After his time at Memphis, Wagner was as an assistant coach for the next eight seasons with head coach Tony Barbee, including four years each at UTEP (2006-10) and Auburn (2010-14).

The Camden, N.J., native has worked in private business in Louisville recently, including six years in new business development for Clark and Riggs in Louisville, a company that offers printing and integrated business solutions.

Wagner earned a bachelor's degree in sports communications from the University of Memphis in 2004.  He is married to his wife Jann and has two children, Dajuan and Jann.  His son Dajuan played collegiate basketball at Memphis (2001-02) before he was selected sixth overall by the Cleveland Cavaliers in the 2002 NBA Draft.

Reece Gaines, who had occupied the position previously, remains on the Cardinals' basketball staff and has moved to the team's video operations.