If Tony Easley doesn't wind up playing professional basketball somewhere it's easy to imagine him as a stand-up comic. He is certainly one of the more engaging and fun loving young men you'll ever meet. And although he's from Alabama he doesn't have the typical slow southern drawl.

“I talk pretty fast for someone from Alabama,” he said. “In high school they called me 'The Mouth of the South' because I talked so much. I used to talk so much junk when I played. But I lost that playing against Pearson Griffith. I tried talking trash to 'Big P' and he just went to work on me. So I kind of quit doing that.“

Easley grew up in Aubirn, Ala., the heart of football country.

“Auburn is a lot like Murray, a small college town,” Easley said. “It might be just a little bigger than Murray. Of course Auburn is all about football and Murray is a basketball town. That was kind of weird to me when I first came here.”

Naturally, Easley was an Auburn Tigers fan and not just because he grew up there. His uncle, Terry Walker played football at Auburn when Bo Jackson was there. And his father ran track for the Tigers while Harvey Glance was there, setting several records in sprint relays.

Easley started playing basketball when he was in fifth grade.

“I played youth league on a team coached by one of my friend's mom,” he said with a laugh. “She didn't do much coaching. She just sat on the bench and we subbed ourselves in and out. But we were successful.”

At 6-9, Easley is one of the tallest players on the team but that wasn't always the case.

“I haven't always been tall,” he said. “I played guard when I was in seventh grade. But I hit my growth spurt going into my ninth grade year. Growing so fast made me uncoordinated and clumsy and I had jumpers knee. But it made me go to the gym and work on my game.”

After playing seventh grade basketball Easley was cut as an eighth grader and again when he was in the ninth grade.

“It was tough,” he recalled. “This other guy got cut with me and he gave up basketball. But I used it as motivation. At first I wanted to walk away but my cousin wouldn't let me. He took me to the gym so I could work on my game.”

“My high school coach was Frank Talbert,” Easley recalled. “He was like a father on and off the court. He taught me about basketball but he also taught me how to be a man.

“Unfortunately he has the same disease that Mike Sutton, the Tennessee Tech coach has. We all heard stories about how mean he was and how tough he was. But he wasn't the Bobby Knight kind of coach. I think his reputation helped keep us in line as much as anything else.”

Easley played at Auburn High School as did former MSU star Aubrey Reese. In 2004-05 he averaged 15 points and 10 rebounds. He notched one triple-double with 15 points, 10 rebounds and 10 blocks against Smith Station. At year's end AHS was 30-7 after winning the state Class 6-A championship.

“That was my senior year,” Easley recalled. “We won by one point in the semifinals of the regional on a buzzer beater. Then when we got back to our locker room there was this stuffed animal - a duck. So that became our good luck charm. We took it with us everywhere after that. And now it's in the trophy case with our state championship plaque.”

Following the season Easley was named to the Alabama senior all-star team. His defensive play sparked a 16 point second half comeback in an 84-79 win over an all-star team from Mississippi.

Easley was recruited by a number of schools in addition to Murray State. Tennessee Tech, Samford, Jacksonville State, Alabama State and Alabama A & M all coveted his services. 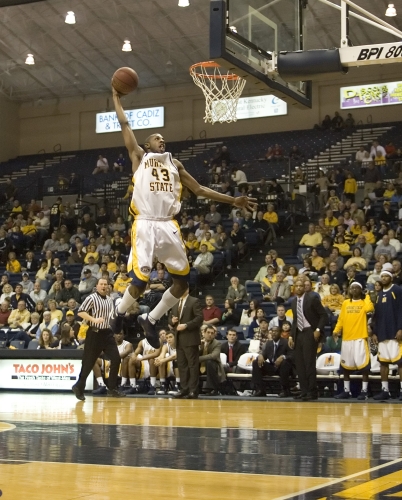