Enoch and Nwora to return to Louisville 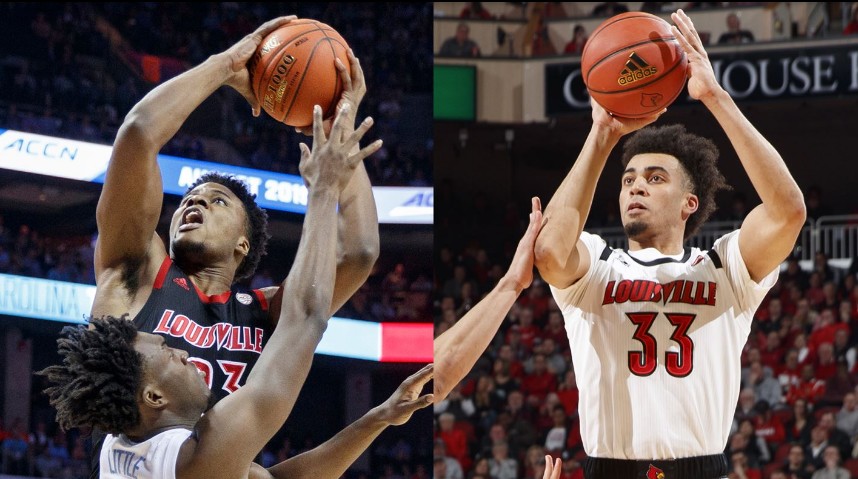 University of Louisville center Steven Enoch and forward Jordan Nwora will return to the Cardinals after withdrawing their names from consideration for the 2019 NBA Draft.  The deadline for individuals to withdraw their names from the NBA draft pool and retain their collegiate eligibility was May 29.

Enoch, who earned a bachelor's degree in communication from UofL this spring, was a double-figure scorer in 17 games for the Cardinals in 2018-19.  In his last 20 games coming off the bench, Enoch averaged 10.0 points, 5.6 rebounds and made 52 percent of his shots from the field, including 11-of-32 three-pointers (.344), in an average of 19 minutes a game.

A powerful player with a soft shooting touch, Enoch was third on the team in free throw percentage (58-of-72, .806).  Enoch scored a career-high 22 points against Boston College, while pulling down six rebounds, and he produced his first double-double with 17 points and 11 rebounds at North Carolina.  He scored 14 points and grabbed seven rebounds against Minnesota in the NCAA Tournament First Round.

Honored on the 2019 All-ACC Academic men's basketball team, Enoch played his first two collegiate seasons at the University of Connecticut before transferring to UofL, sitting out the 2017-18 season and playing his junior year in 2018-19.

Honored as the 2019 ACC Most Improved Player, Nwora was the second-most improved scorer in the nation with his 17.0 scoring average (sixth in the ACC), up 11.3 points per game from his 5.7 average a year ago.  The All-ACC third team selection is one of five players in the ACC who scored 20 or more points on at least 13 occasions this season.  Nwora scored in double figures in 31 of 34 games and produced nine double-doubles this season.

An exercise science major who was named to the All-ACC Academic men's basketball team, Nwora scored a career-high 32 points against Boston College in Louisville with 10 rebounds and four assists.  Honored on the 2018 NIT Season Tip-Off All-Tournament team in November, he made at least three three-pointers on 16 occasions this season.

Enoch and Nwora helped Louisville achieve a 20-14 record against the nation's fourth-toughest schedule and participate in its 39th NCAA Tournament.  Picked in the preseason to finish 11th in the ACC, UofL attained a 10-8 conference record and earned a tie for sixth in the final regular season standings.  The Cardinals will return six of their top seven scorers from last year and welcome at top 10 recruiting class.

Clemson Football: Can the Tigers go 12-0?