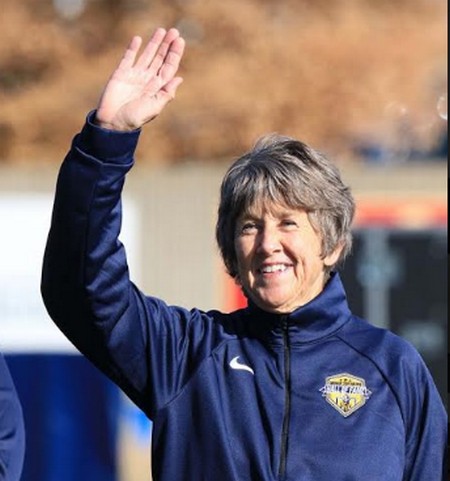 Former Murray State women’s tennis coach Connie Keasling became part of the Ohio Valley Conference Hall of Fame when she was inducted as part of the class of 2021 along with two former athletics directors, Phil Dane of UT Martin and Theresa Phillips, who also coached women’s basketball at Tennessee State.

Keasling is Murray State’s 13th inductee into the OVC Hall of Fame and the ninth head coach and the first inductee since former AD Mike Strickland was inducted in 2017. She is the third MSU woman to be inducted following former MSU president, Dr. Kayla Stroup in 1997 and Coach Margaret Simmons in 2014.

She had 73 student-athletes come through her program at Murray State and during one 10-year period, every player graduated and won an OVC Championship. Her teams also performed at a championship level in the classroom with 42 OVC Commissioner and 39 Honor Roll winners and five OVC Medal of Honor winners. The Racers also had 28 ITA Scholar-Athlete Award winners and the program had two NCAA APR awards.

Keasling’s teams were also known for sportsmanship on the court, earning four OVC Team Sportsmanship Awards and an ITA National Team Sportsmanship honor (2006-07). When she retired, her 22 years of service was the fourth-longest tenure of any coach in Murray State history.

Keasling played tennis and basketball at East Tennessee State when they were members of the OVC and was a graduate assistant tennis coach and volunteer assistant women’s basketball coach at Eastern Kentucky before taking the Murray State job.

The Ohio Valley Conference Hall of Fame was organized in 1977 with the intent of honoring the coaches, administrators, faculty and staff that have been associated with the OVC for at least five years and provided extensive and outstanding service to the Conference. With the induction of this year’s class, the membership will reach 92.