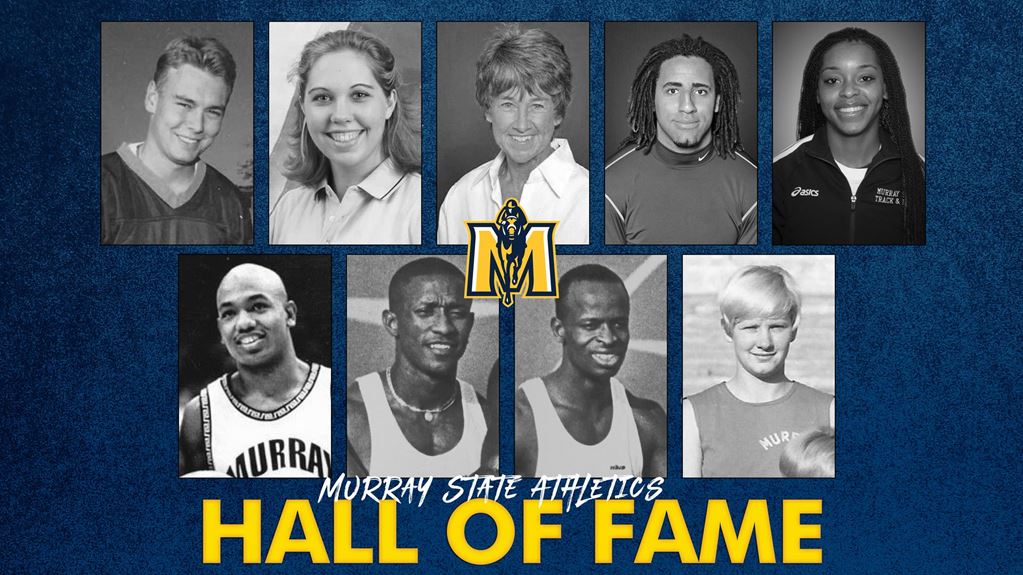 The Murray State Athletics department announced the 37th class of the MSU Hall of Fame. The 2019 class of nine of five men and four women includes a pair of greats from football and men’s track & field, as well as one selection each from men’s basketball, women’s track & field, rifle and coaches.

Here’s a closer look at the outstanding class of 2019 for the Murray State Hall of Fame.

Rob Hart arrived at Murray State in the spring of 1995 to play for Houston Nutt. After a redshirt season, the barefoot place kicker from England set records and helped the Racers to an Ohio Valley Conference championship in 1996.

After graduating from MSU in 1999, Hart spent three seasons in the National Football League with the Tampa Bay Buccaneers (2002), Miami Dolphins (2003) and New Orleans Saints (2004), but did not appear in a game. His greatest professional success came in NFL-Europe with the  London Monarchs (1998) and Scottish Claymores (1999-04). Hart was twice named All-NFLE and was the all-time leading scorer with 333 points when his career ended.

Arriving at Murray State from Roy, Washington in the fall of 2000, Morgan Hicks was destined for a big career in collegiate and international competition.

Hicks was a four-year shooter on the MSU rifle team for head coaches Diana Stone, Meegan Basek and Ann Proctor.

Hicks earned eight All-American honors and the 2004 NCAA air rifle title. She dominated the OVC Smallbore Championship by winning it in four-straight seasons.

After graduation, Hicks jumped right in and served as the assistant coach to Coach Proctor for one season. Hicks was promoted to MSU head coach and she served in that role 2005 to 2007 where she led the Racers to the NCAA Championship where they placed eighth.

Hicks competed in the 2004 Olympics in Athens, placing 12th in the smallbore competition for Team USA. In 2008, she earned her first-ever World Cup medal, by taking the gold in the 50-meter three-position rifle competition at the International Shooting Sports Federation (ISSF) World Cup in Rio de Janiero, Brazil. She also won a gold medal and two silver medals at the Championship of the Americas in 2001 in the junior classification in the competition featuring athletes from North America and South America.

From 2007-12, Hicks was head coach at Nebraska where she led the Huskers to a fourth place finish at the NCAAs in her first season.

In her shooting career, Hicks also served as secretary and treasurer of the Collegiate Rifle Coaches Association and has been a member of the USA Shooting Board of Directors.

With a career that spanned 22 years at Murray State, women's tennis coach Connie Keasling retired in 2011. She was a certain MSU Hall of Fame pick, the only question was when.

Her teams also performed at a championship level in the classroom with 42 OVC Commissioner’s Honor Roll winners and five OVC Medal of Honor winners. The Racers had 28 ITA Scholar-Athlete Award winners and the program had two NCAA APR awards.

Keasling’s 22 seasons was the fourth-longest tenure of any coach in Murray State history when she retired.

She joins Nita Head (1967-82) as the only women’s tennis coaches to be inducted into the MSU Hall of Fame. Keasling is the 17th head coach to be inducted and the third woman, following Nita Head in 1987 and Margaret Simmons in 1994.

Keasling played tennis and basketball at East Tennessee State and graduated in 1980. She earned a master's of science in physical education in 1981 from Eastern Kentucky.

One of the most feared defenders in the history of OVC Football, Austen Lane’s collegiate career in football took him to the OVC Defensive Player of the Year in 2009 and to the National Football League as a fifth round draft pick by the Jacksonville Jaguars in the spring of 2010.

Arriving at MSU as a tall, but thin player from an All-State prep career in Wisconsin, Lane developed into one of the most feared defensive ends in the game. By the time he finished his junior season in 2008, Lane was an Associated Press All-America and named to the Sporting News Fabulous 50 All-America list. In 2009, he was the OVC Defensive Player of the Year, AP All-America (also in 2008) and was sixth in voting for the Buchanan Award, which is given to the best defensive player in the nation.

Lane became the highest drafted player in MSU history when he was selected by the Jacksonville Jaguars in the 2010 NFL Draft. That NFL honor has only been topped once at MSU since, when Quincy Williams was taken in the third round by the Jaguars in 2019.

Lane had a five-season run in the NFL, with three seasons being with the Jaguars and one each with the Detroit Lions and Chicago Bears. Lane retired from pro football in 2015 and ended with 30 games played 66 tackles.

In 2017, Lane proudly returned to MSU when he graduated with a degree in journalism.

Arriving at Murray State in 2009 from Palmetto, Fla., Alexis Love was a three-time state finalist and was looking to advance her running career with the Racers. Working primarily with assistant coach Adam Kiesler, Love did exactly that when she shot into the national spotlight as a junior in 2012.

In 2012, Love was named the OVC Female Track & Field Athlete of the Year and the Athlete of the OVC Championship, earned status as a three-time All-America honors. In the conference outdoor meet, Love accounted for 23.5 points when she won the 100m and 200m dashes (set the 200m OVC Championship record) and she anchored the 4x100m relay winner as well as the fifth place team in the 4x400m relay. She set the OVC record in the 200m at the NCAA Regional and also advanced to the finals in the 100m event where she placed sixth.

However, the big take-away from this awesome showing, was that her 100m time of 11.28 and in the 200m of 23:33 surpassed the Olympic A-Standard, which opened her up to an entirely different opportunity. Love’s next stop was at the USA Olympic Trials in Eugene, Oregon, where she was one of only five athletes that were still in school against 13 runners that were professionals. Love made it to the semifinals in each event before bowing out. She was close as anyone in MSU history to becoming the first Racer to qualify for the Olympics for Team USA.

Since graduating from Murray State in 2013 with a degree in law enforcement, Love has carved out a career as one of the top professional sprinters in the country the hard way. Void of a sponsorship contract, Love has been a full-time self-funded professional athlete and has stayed relevant in the national sprint scene. In 2016, Love was back at the USA Olympic Trials and has competed internationally as well.

The Murray State men’s basketball program has the greatest tradition in the OVC and one of the players responsible for it is De’Teri Mayes who left the Racers after having the best collegiate career of any two-year player at MSU.

Out of Montgomery, Ala., Mayes was recruited by Coach Mark Gottfried and assistant coach Tom Kelsey. Mayes quickly displayed a rare combination of talent and energy as he led the Racers to a pair of OVC regular-season and OVC Tournament titles in 1996 and 1997. The Racers made what was at the time, their ninth and 10th NCAA appearances with games against Duke and Rhode Island.

Mayes and the Racers had a program-record 29 wins in the 1997-98 season and a top-25 national ranking for the first time in 26 years. Mayes was the 10th leading scorer in the nation at 21.5 points per game and was named the OVC Player of the Year and at the end of the school year, the OVC Male Athlete of the Year.

Until Jonathan Stark topped it in 2018, Mayes’ two-year MSU scoring record of 1,340 points had stood for 20 years. His 21.26 career scoring average is still tops all-time at MSU. With only 63 games played, Mayes is still the 22nd leading scorer in Murray State history. His 186 made 3-point baskets is eighth at MSU and his .427 3-point percentage is third.

Part of a talented group of student-athletes from Barbados that competed for Coach Stan Narewski, Stevon Roberts was a top performer for the Racers starting in 1990. Roberts was part of back-to-back Murray State OVC outdoor track & field championship teams in 1991 and 1992 and one OVC indoor title in 1992.

He still owns three Murray State records including, the indoor 800m and mile relay and the outdoor 1600-meter relay. From 1990-93, Roberts was a four-time Ohio Valley Conference champion as he won the outdoor 400m and 800m events in back-to-back seasons.

Competing at a high level even after he graduated from Murray State, Roberts competed for Barbados in the 1992 Olympic Games in Barcelona, Spain as part of the 4x400 relay team and in the 800m event.

Roberts graduated from Murray State in 1993 with a degree in accounting and returned to Barbados where he created several businesses including financial consulting, real estate, transportation and property management. Roberts has also served in the government of Barbados.

With a career overlapping with Stevon Roberts for three years, Seibert Straughn was another successful MSU-Barbados connection that produced back-to-back OVC outdoor track & field championships in 1991 and MSU swept both the outdoor and indoor championships in 1992.

Straughn represented Barbados in the 1988 Seoul Olympic Games in the 400m run and he was part of his country’s 4x400m relay team. He was back in the Olympic Games four years later in 1992 in Barcelona, Spain competing in the same events. He won the bronze medal at the 1989 Central American and Caribbean Championships.

After his graduation from Murray State in 1994 with a degree in physical education & health, Straughn returned to his hometown, Saint Phillips where he remains active in coaching youth sports in Barbados. He has served at Christ Church Foundation School since 2001 and as chair for the Barbados National Sport Council. In 2004, with his days of competing at the Olympics behind him, he was the head coach for the Barbados Olympic track & field team in 2004 at the games in Athens, Greece.

Out of the many pioneers that Murray State has produced in women’s athletics, Pat Ward Seib ranks among the best for her love of competition and her amazing talent that allowed her to not only participate, but also excel in track & field, cross country, basketball, volleyball and tennis. Seib still stands as one of MSU’s most versatile athletes of all-time.

Ward Seib arrived at Murray State in the fall of 1967 after participating on the Kentucky State track & field championship team at Owensboro High School. She competed in a time before women’s athletics became organized by Murray State and the Ohio Valley Conference in the late 1970’s.

In track & field, Ward Seib held the records for the Racers in the 880yd and mile runs as well as the javelin. She was part of the MSU team that finished ninth in a field of 52 schools at the 1970 National Intercollegiate (NAIA) Track and Field Championships. Ward Seib ran to a fourth-place showing in the 4x220 event.

Ward Seib has spent her professional career involved in athletics and education. After graduating from Murray State in 1971 with a degree in health, physical education and recreation, she spent 35 years teaching at Gibson Southern High School in Fort Branch, Ind. She coached track & field there as well as basketball and volleyball. She has served in many capacities in shaping prep athletics in Indiana, including chairperson for the Indiana Coaches of Girls Sports Athletic Association.