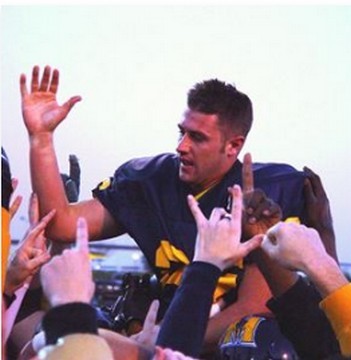 Time was when most kickers were little guys with foriegn accents. But, with the growing popularity of soccer in the United States that's changed. So, while most kickers still get their early training in soccer, they're far more likely to speak with a southern accent than a European one.

MSU's head coach at the time, Denver Johnson didn't express an interest in Andrus until midway through his senior year. But, it probably wouldn't have made any difference if the Racers had gotten involved earlier because Andrus was a blue-to-the-bone Kentucky fan. And when the Wildcats offered him the opportunity to walk on he jumped at it.

"I was always a Kentucky fan," Andrus said. "Basketball, football, everything. I grew up on it.  They offered me preferred walk-on status. I had always wanted to go to Kentucky and I wanted to get away from home, so I kind of liked everything about it."

Unfortunately, things didn't work out as well as he had hoped in Lexington. Andrus left Murray two days after graduation so that he could take a couple of summer school classes at U.K. But, he was homesick and he didn't work out much during the summer. Then, he missed two-a-days in order to visit Murray which did not endear him to the coaches and put him even further behind Kentucky's other kickers.

"When I went back I had to start over," Andrus said. "I didn't want to work as hard, coming from high school where we didn't have to work hard. But, when you get to college you figure out how much dedication you have to have, and I had to learn the hard way. I got up there and I worked out with the varsity. But I wasn't happy and it was reflected in my kicking. My mind wasn't anywhere near where it should be."