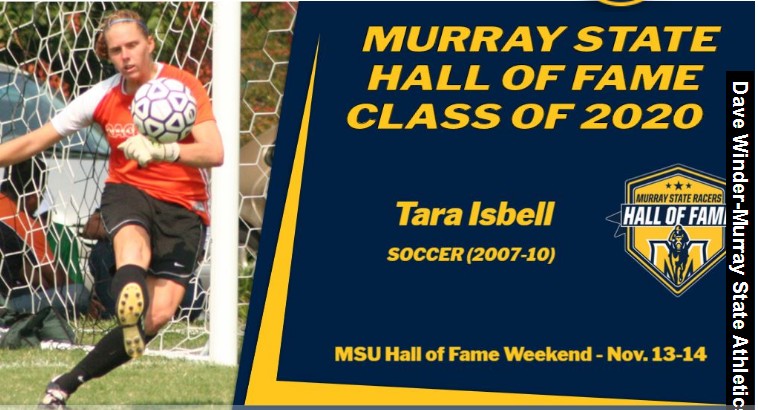 Outside the United States soccer is almost like a religion. People live their lives to the rhythm of the game, and when the local or national team plays emotions are at a fever pitch.

It may never have the same kind of following here, but the Racers' junior goalkeeper Tara Isbell understands its appeal.

"It's the ultimate team sport," she said. "And it's not a coach's sport. Your coach gives you instructions, but you have to go out there and read the game as it happens and adjust on the fly. We don't run plays. It's all reading and reacting. The only time we have set plays is if there is a corner kick  or a dead ball situation."

Isbell grew up in nearby Mayfield, and although she played most sports as a youth, there was never much doubt where her heart lay.

"I started playing soccer when I was seven or eight," she said. "It seems like that was when soccer started to get big in Mayfield. Then when I was 12 or 13, I started playing for a club team. We traveled all over and played in tournaments. At first I was with the GCSA Alliance, and then I played over here in Murray with WKYC Premier."

"He was pretty laid back," Isbell recalled. "He wasn't that knowledgeable about soccer but he was always studying the game and doing whatever he could to help us improve. He was really dedicated to us."

Although Isbell had played center-midfielder and defender as a youth she played goalkeeper for GCSA and WKYFC.

"We needed someone to do it who was brave and decent with their hands," she said. "So they just kind of threw me in there. When we first started, we were the first traveling team to come out of Mayfield. We would go to tournaments and get clobbered, like 10-0. Looking back, I'm surprised we kept coming back to play. But I still loved playing, even though it was frustrating at times.

"When I switched to WKYFC a lot of other people from Mayfield came over. Of course there were girls from Murray and Calloway too as well as a couple from Marshall County."