The Hall of Fame Voice of the Racers - Neal Bradley 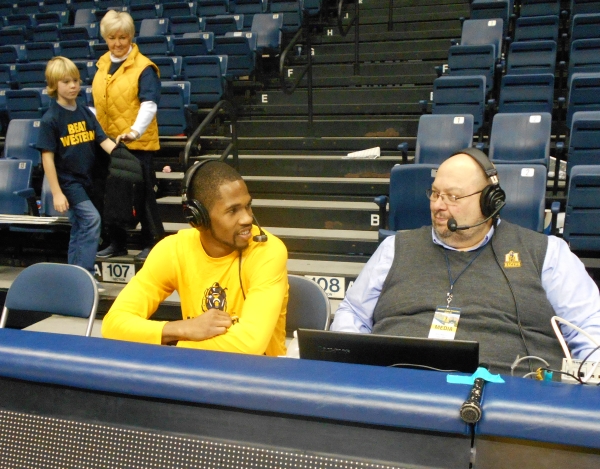 On Monday, June 26, it was announced that Neal Bradley, the Voice of the Racers, would be inducted into the Murray State Athletics Hall of Distinction. The article below is from a piece I wrote in 2009...

Neal Bradley took over as the Voice of the Racers in 1991 but he started life as a Kentucky fan.

"All my friends were UK fans and I was too," he said. "And then when I was about 12 a friend of mine had tickets to a Murray State game and asked if I wanted to go.

"Western was nationally ranked and it was an absolute zoo that night,ö Bradley said. ōWe had to wait about an hour to get into the building. It was one of the greatest games ever played in Racer Arena and I don't think I've cared about UK ever since.

"I could barely get WNBS where I lived so I listened to Chuck Shuffett whenever I could. I thought he did a great job. He painted a great picture and I became a Racer fan by listening to him. I never thought I'd be doing something like that myself."

Bradley took over play-by-play duties the same year that Scott Edgar took over as head coach.

"I got one year of Popeye Jones, his senior year," Bradley said. "Edgar was the new coach and he wanted to press and run. He wasn't going to feature Popeye but they started 3-9 so he decided maybe they should give the ball to the big guy and we wound up going to the NCAA tournament.

"Of all the teams over the years my favorite was the the team that played Duke in the NCAA because they achieved more than I ever thought they could. In retrospect they may have just been better players than anyone thought at the start of the year."

No one gave the Racers a chance in that 1997 match-up with the powerful Blue Devils.

"Everyone expected annihilation but Vincent Rainey just missed a mid-court shot at the end that would have sent it into overtime," Bradley said. "At one point in that game a Duke player ran by me and called out to a teammate ¢ 'You've got to help me! I can't guard that guy!' He was talking about Rainey."

As Voice of the Racers Bradley got to see a side of the players and coaches that most fans never see.

"When Marcus Brown was a senior he got on a hot streak and it started after he had come to talk to us before a game," he recalled. "So he started to come and visit with us before each game. And of course he was on the post game show a lot so we got to know him pretty well.

"I remember after one game he asked us to make it brief because he had to study for a test. So I asked him what subject it was in and told me it was a swimming test. I asked him if he could swim and when he said he could I told him he shouldn't have any trouble passing it."

There have been times when even The Voice had to keep his mouth shut though.

"Mick Cronin's first year we had a chance to break into the Top-25 and we went up to Eastern Illinois and lost," Bradley said. "Well a couple of players were laughing in the back of the bus after the game. So Mick walks back there and asks what's so funny. Of course they didn't have an answer.

"He was really angry and he told them they had just lost to the worst team in Division I college basketball and he couldn't imagine what could be so funny. Well I had looked at the Sagarin ratings earlier that day and Morehead was actually below EIU in the rankings but I didn't think that was a good time to point it out."

Bradley has been doing play by play for Murray State for such a long time that he's become an institution. To Racer fans he's a legend, ever bit the equal of Cawood Ledford. It's a status he had no thought of attaining at the outset.

ōOh gosh no!ö he exclaimed. ōI had no idea I'd be doing this for 20 years. I thought if I could do it for four or five years it would be amazing.ö

Now people even have some of his famous calls on their cell phones as ring tones.

ōIt's a little odd hearing that,ö he admitted. ōBut it's flattering that anyone would want my voice as their ring tone.ö

Q & A with Amber Guffey, Hall of Famer