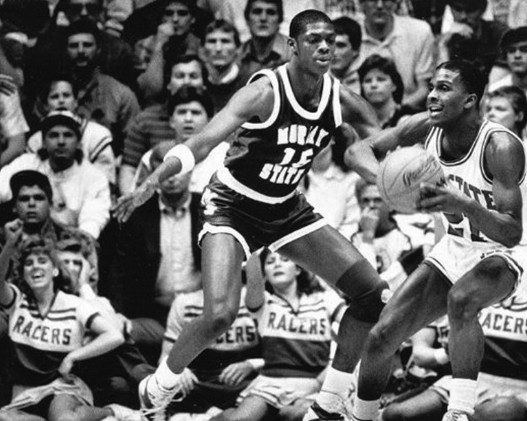 Thirty years ago Murray State won its first game in the NCAA tournament. Given a 14 seed, the Racers beat the 3 seed North Carolina State 78-75.

Going into the tournament no one gave Murray State much of a chance. And who could blame them? The Racers had lost eight times during the regular season. They had lost to Pan American of all things! And they struggled against Christian Brothers, beating the NAIA team by a mere 13 points.

How were they supposed to beat a perennial power like North Carolina State? The Wolfpack had stars like Vinny Del Negro, Charles Shackleford, Chris Corchiani, Chucky Brown, and Rodney Monroe - all of whom went on to play in the NBA.

And they had one of the most successful coaches in the country in Jim Valvano.

Everyone concurred, Murray State had no chance. They might as well not even make the trip to Lincoln, Neb. for the first round game. Perhaps that's why when they did show up the Racers found themselves staying in a dormitory at the University of Nebraska while all the other teams were housed in nice hotels.

“We can beat anybody when we play well, just like anybody can beat us when we don't.” Don Mann told reporters before the game.

“To me it was just another game,” Jeff Martin said. “We knew we were playing a good team. But we had played other good teams and beaten them. We nearly beat Memphis State at Memphis. That told us we could play with anybody.”