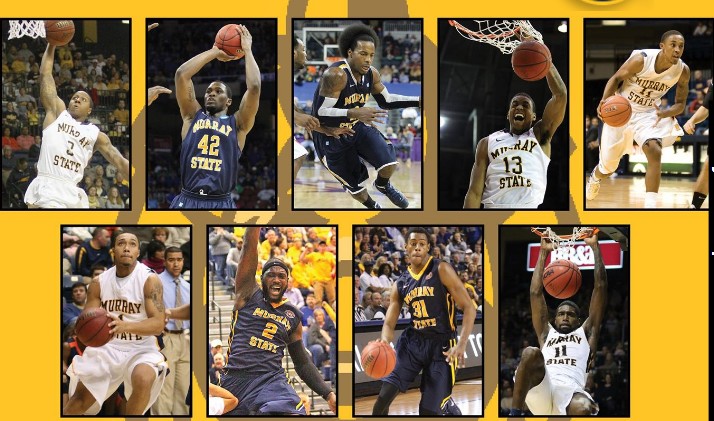 A team of former Murray State basketball stars is prepping at the CFSB Center for The Basketball Tournament, a popular event with a winner-take-all, million-dollar first place prize

In July, a collection of former Murray State men’s basketball stars will compete in The Basketball Tournament (TBT) as a team named The Overlooked. But first, they make a stop in Murray this week to practice and to see Racer Nation again.

The Overlooked have two days of open workouts in which fans can stop by the CFSB Center to watch the players, grab an autograph or photo and say hello.

Fans are invited to come to the CFSB Center Monday (July 19) at 6:30 p.m. and Thursday (July 22) at 6 p.m. Admission is free. Fans must enter the CFSB Center through Upper Gate-A which is the entrance with the large video board on Gilbert Graves Drive in Murray. There will be limited concessions available.

The Overlooked is a collection of former Murray State stars including five players from the 2011-12 Racers’ that started the season 23-0 and won a game in the NCAA Tournament, while posting 31 victories. The group is highlighted by MSU Hall of Famer Isaiah Canaan, Ivan Aska, Ed Daniel, Brandon Garrett and Donte Poole. One of the stars from the Racers’ 29-win team from 2009-10, B.J. Jenkins is also on the roster, as is Jonathan Fairell from the 2014-15 team that had a 25-game win streak and Jeffery Moss, who was an All-Ohio Valley Conference selection in 2016. Shaq Buchanan, the 2019 OVC Defensive Player of the Year is also on the roster. There are two players on the Overlooked roster that played at other schools: Rasheed Sulaimon (Duke & Maryland) and Nate West (Letourneau). Every player on the Overlooked has played in several countries and leagues as professionals.

The TBT as it is known (The Basketball Tournament) is a wildly popular summer 5-on-5 event first held in 2014. Since that time, the event has staged more than 400 games and paid out more than $10 million in prize money. The tournament is set up with four regional sites with 16 teams at each site including, Peoria, Ill., Columbus, Ohio, Charleston, W.V. and Wichita, Kan. The tournament format is single-loss elimination, meaning one loss and a team is done.

The Racers have been placed in the Illinois Regional in Peoria with games being played July 24-28 at the Peoria Civic Center. The Overlooked is a No. 6 seed in their regional and plays its first game Saturday (July 24) against Team Heartfire, a No. 11 seed, at 4 p.m. Central Time on ESPN3. A win would put the Overlooked into a Monday (July 26) game at 8 p.m. CT against the winner of the game between Boeheim’s Army, the No. 3 seed and No. 14 seed, Forces of Seoul.

The goal is to advance from the Peoria Regional and to the TBT Championship (July 31-Aug. 3) in Dayton, Ohio.

Rolling Stone Magazine said this about the event. “The TBT appeals to the belief that maybe, just maybe, you and your buddies can catch fire for a few games and shock the world. It is more than simply a hoop junkie’s dream; it is, perhaps, the highest-quality basketball this side of the NBA.”