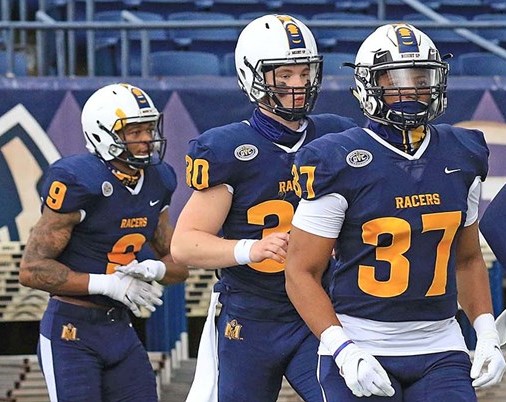 Murray State has been picked the preseason football favorites in the Ohio Valley Conference for the 2021 season. The Racers picked up seven of a possible 14 first-place votes in a poll of league head coaches and communications directors.

It marks only the third time the Racers have been tabbed the preseason favorites and first time since 1996, when Houston Nutt was the head coach and the program was coming off an OVC Championship and NCAA Playoff appearance. The only other year the team was tabbed the favorite (dating back to the first preseason poll in 1978), was in 1980 when Mike Gottfried was head coach, and the team was once again coming off an OVC title and playoff appearance.

Murray State totaled 64 points to finish just ahead of Austin Peay and Southeast Missouri, who tied for second-place with 60 points. The Governors and Redhawks were 2019 OVC Co-Champions and both appeared in the FCS Playoffs that season. UT Martin was tabbed fourth (38) and followed by Tennessee State (32), Tennessee Tech (28) and Eastern Illinois (12).

Coming off the unprecedented 2020-21 season that saw Conference play take place in the spring, the seven OVC member institutions will play a six-game round robin Conference schedule this season, the 74th year of football in the OVC.

In the first season under head coach Dean Hood, Murray State earned its first national ranking since 2011 on its way to a 5-2 OVC record and second-place OVC finish (the team played for the league title the final week of the season). The Racers started last year 5-0 (its best start since 1995) and achieved its first winning season since 2011 (and only the third winning season since 2005) and first above .500 OVC mark since 2011. MSU finished the year ranked No. 17 in the FCS Coaches Poll (No. 18 in the Stats Perform poll). This season the Racers return most of its key contributors from last year including 10 players who earned Preseason All-OVC honors. Among those players is quarterback Preston Rice who accounted for 15 touchdowns (9 passing, 6 rushing) and over 1,500 yards of total offense. Also back is defensive back Marcis Floyd who earned All-American honors a season ago after tallying 32 tackles, two forced fumbles, six pass breakups and three interceptions, one of which he returned for a touchdown.

Austin Peay has been ranked in each of the past three seasons (2018-20) including finishing last year No. 23 in the Stats Perform poll; this comes after never being ranked previously in its program history. After advancing to the FCS Quarterfinals in its first-ever appearance in 2019, Austin Peay turned to Scotty Walden to take over the reins of its program. Walden took over after a three-game fall season and led APSU to a 4-2 Conference mark this past spring. The team will look to continue its winning ways (21-9 in OVC play over the past four years) with several key players, including senior nickelback Kordell Jackson (a two-time consensus All-American) and second-year quarterback Draylen Ellis, who was named OVC Co-Freshman of the Year last season. Jackson tallied seven interceptions in 2019 and a year ago did not see the ball thrown his way as much, but instead he finished the year with 10.5 tackles for loss and five passes defended. As a true freshman Ellis passed for 1,270 yards and 14 touchdowns and ran for two additional scores in leading the team to four victories in the spring.

Just a year removed (2019) from an OVC Championship and playoff berth, Southeast Missouri finished 4-3 in Conference play last season. The Redhawks were led by running back Geno Hess who led all FCS players with 12 rushing touchdowns to go along with 666 rushing yards (15th nationally). The team also returns Zion Custis, who scored four rushing touchdowns. On the defensive side of the ball the Redhawks return defensive tackle Bryson Donnell (41 tackles, 4 quarterback hurries) and linebacker Omardrick Douglas (26 tackles, 3.5 tackles-for-loss). Now in his eighth year as head coach, Tom Matukewicz has established SEMO Division I records for overall (37) and OVC wins (29) as well as wins over nationally-ranked opponents (6).

The 2021 season marks the 16th for head coach Jason Simpson who has 90 victories during his Skyhawk career, which is just two away from fifth place in OVC history. Overall Simpson is one of just 16 coaches in league history to coach 10 or more seasons at the same school. This season the Skyhawks return a plethora of talented receivers including All-American tight end Rodney Williams II. Williams made the move from wide receiver to tight end before last season and tallied 30 catches for 327 yards and four touchdowns in seven games. Also back is Colton Dowell, who switched from tight end to wideout and made 40 catches last year, Donnell Williams (29 catches), Marqwell Odom (19 catches) and running back Peyton Logan (30 catches out of the backfield). On the defensive side of the ball, UTM has two Preseason All-OVC defensive back returning in cornerback Jay Woods (23 tackles, nine pass breakups) and safety Deven Sims (team-best 9 tackles, four pass breakups).

The only new head coach in the OVC this season is no stranger to any football fan. Former Ohio State Heisman Trophy winner and Tennessee Titan All-Pro running back Eddie George enters his first season as a head coach, taking over the Tennessee State program. George will guide the Tigers in home games at Nissan Stadium, the same venue he scored touchdowns in as a NFL player. He has assembled an experienced coaching staff that includes individuals who have achieved at the highest levels of college and professional football, including former Raiders and Browns head coach Hue Jackson who will serve as the team's offensive coordinator. TSU returns Freshman All-American running back Devon Starling, who led all freshmen nationally in rushing yards per game (92.6) and finished with 648 total rushing yards in seven games (which ranked 17th overall nationally and second among all freshmen). The team also returns three Preseason All-OVC picks on the defensive side of the ball in tackle Davoan Hawkins (32 tackles, 5.0 sacks), linebacker James Green (28 tackles, 5.0 tackles for loss) and his brother safety Josh Green (39 tackles, three interceptions). The Big Blue also has All-American kicker Antonio Zita, who converted 14 field goals last year (ranking fourth nationally with 2.0 made field goals/game), five from 50-yards or longer, including the longest kick at all levels of the NCAA during the year, with a 62-yard blast against Eastern Illinois (which tied the OVC record and was one yard shy of the FCS record).

After a win over nationally-ranking Austin Peay to begin the spring, Tennessee Tech earned a spot in the Top 25, marking its first national ranking since 2011. The breakout star of 2020 for the Golden Eagles was sophomore quarterback Willie Miller who took over the starting role and finished the campaign with 879 passing yards and five touchdowns while also rushing for 243 yards (second-most on the team) and four additional scores in seven games. On the opposite side of the ball head coach Dewayne Alexander returns Preseason All-OVC picks Chris Tucker (34 tackles, 7.0 tackles for loss, 3.5 sacks) and Josh Reliford (41 tackles, two interceptions) along with linebacker Seth Carlisle who led the team with 49 tackles in the spring.

This year marks year number three for Adam Cushing at Eastern Illinois. The Panthers will kick off the season with a Week Zero game when they take on rival Indiana State for the 87th time. It marks the fourth time an OVC team has competed in a Week Zero matchup. Last season the Panthers led the OVC in kickoff returns (22.0 yards/return), fewest penalties (4.83/game), fewest yards penalized (31.17/game), kick return defense (10.31 yards/return) and blocked punts (2). Among the team's returning players is linebacker Jason Johnson who was named a Sophomore All-American after making 66 tackles in just six games, a mark that ranked eighth among all FCS players (11.0/game). Also back is kick returner Matt Judd, who ranked 13th in the FCS in kickoff return average last year (24.8 yards/return).