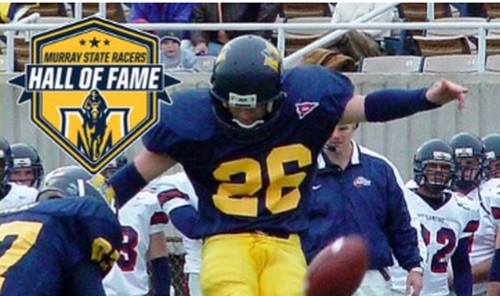 Former Racer football star kicker, Shane Andrus, who competed for the Racers from 2000-02, has beenselected for the Racer Athletics Hall of Fame. He was part of one of the great moments in Racer history in 2002.

In Racer lore, two of Murray State's most memorable plays have happened inside the last 20 years. It was Andrus' 52-yard field goal on the final play that delivered the Racers its eighth Ohio Valley Conference championship in 2002. In 2010, Danero Thomas hit the buzzer shot to lead the Racers to NCAA Tournament glory. Andrus with "The Kick" and Thomas with "The Shot", are famous Racer moments that will never be forgotten.

However big that one kick was, Andrus earned a MSU Hall of Fame spot by his excellent play for the Racers from 2000-02 in which he made 12 field goals and was 68-of-69 point after attempts. His strong leg helped the Racer offense add another weapon that could put points on the board.  As a two-sport star in football and baseball at Murray High School and Andrus had an eye to play both sports at Murray State when he arrived in 2000. He eventually focused on football kicking. In 2001, he was named All-OVC and All-America and was named All-OVC again in 2002.

"I was thrilled once I got the news about the Hall of Fame," Andrus said. "The thing that makes this really special is that I was born a Racer. Being a hometown boy and even calling Murray my home now just makes this moment extra special. I just wanted to play and Murray State and the coaches gave me that chance and I'll be forever grateful for what MurrayShane Andrus State did for me. I can't wait to celebrate with the other seven inductees in November."

Andrus kept on competing after his MSU career ended. He was a kicker in the National Football League from 2006 to 2010 with the Colts, Giants, Buccaneers and 49ers.