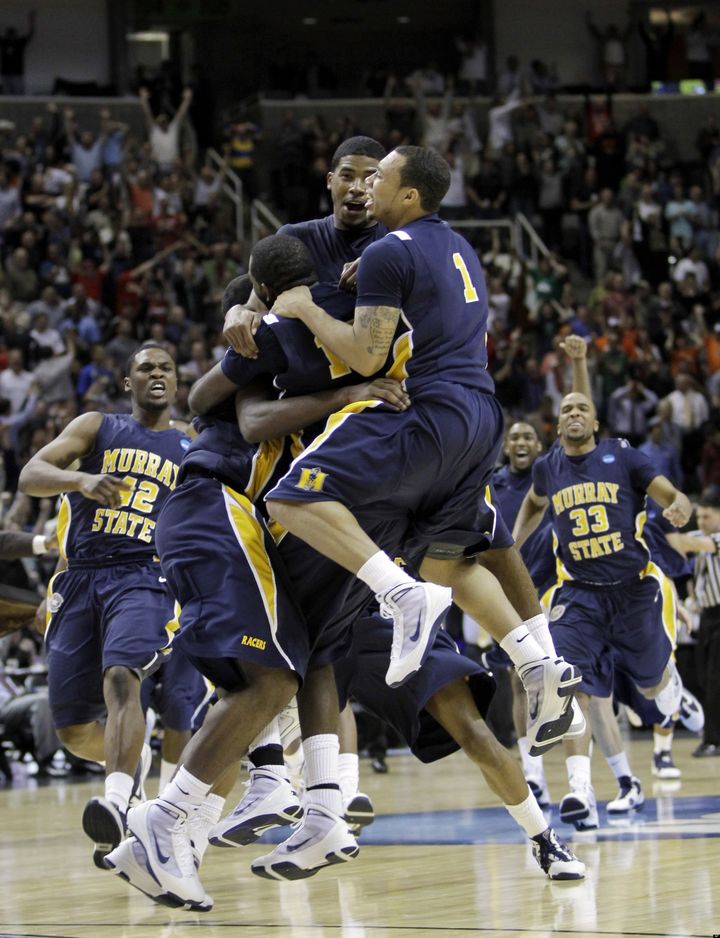 They say that history is what happens when you aren't paying attention. And it's certain that no one expected the 2009-10 season to be historic.

Oh, everyone expected the Racers to be good. Murray State was tabbed as co-favorites with Morehead by OVC coaches and sports information directors. And three MSU players were named to the OVC's preseason all-conference team: Ivan Aska, Isacc Miles, and Danero Thomas.

"This is our best chance to win it since I've been here," he said before the season began. "There is always pressure here in Murray. You can't go anywhere in Murray without people expecting great things, and that's just a way of life around here."

But no one expected history to be made.

And although Murray State played well in the season opener at California, they came up short, losing 75-70.

Then they won four straight games heading into the OVC opener at the RSEC against Eastern Kentucky.

The Colonels led almost every step of the way. They led by three at halftime and led by nine with 6:06 to play. It looked like the Racers were done. But they rallied and with 11 seconds left the game was tied, 60-60.

It was the kind of game they had lost so many times over the previous three years. But this time there was a difference. This time, they had a transfer shooting guard named B. J. Jenkins who asked for the ball. He asked for the ball despite the fact that before the final shot he was just 2-of-8 from the field.

"I wanted the ball," Jenkins said, "because I felt like I owed my team because I was playing so horribly. I felt like I had to make a shot to make up for what I was doing earlier.ö

He got the ball on the left wing with 2.6 seconds left and drilled a jump shot for the 62-60 victory.

The Racers completely humiliated co-favorite Morehead in the next game, crushing the Eagles 86-56. Danero Thomas led the way with 18 points, becoming the 35th member of MSU's 1,000-point club.

"Defensively we came out with a good effort, and we had a good night shooting the ball," Kennedy said. "We've got a chance to be a good team when we use our depth like we did tonight."

"I'm proud of Danero. He's been through the tough times with us when we were first starting here.  I'm glad to see him reach that milestone."

The Racers split their next four games, beating East Tennessee State and Chattanooga and losing to Louisiana Tech and Western Kentucky.

With SIU-Edwardsville up next MSU was 9-3 overall and 2-0 in the OVC.

They proceeded to win their next 17 games, breaking a school record in the process.

In 10 of the previous 12 years MSU had lost at Austin Peay. This group of Racers flushed the Peay in Clarksville 69-53 behind 14 points from Jenkins, 12 from Miles, and 10 from freshman Isaiah Canaan.

ōIt's a good win, but we have more work to do,ö Jenkins said. ōWe're right back at it. So, we can't enjoy it too much. It does feel good for guys like Danero, Tony (Easley), and coach Kennedy who have never won here before.ö

The streak also included a 92-68 thrashing of Jacksonville State at the RSEC. Jenkins led the way with 19 points and four other players reached double figures as Miles had 16, Aska and Canaan each had 11, and Easley had 10.

And then there was the 77-45 road win at Tennessee-Martin, a game the Racers dominated from the outset. They led 46-23 at halftime, and were able to substitute freely in the second half. They shot 56.6 percent from the field and held Martin to 24.6 percent. They hit 8-of-18 three-pointers while Martin hit just 1-of-11.

Canaan and Aska led the scoring with 13 each. But Easley was also a major factor as he scored eight points, grabbed seven rebounds and blocked seven shots. It was one of nine games during the season in which Easley blocked at least four shots as he wound up setting the single season record with 95. He bettered the previous record by 16.

Following the win over the Skyhawks, Kennedy expressed concern that it was all coming too easily.

ōWhat I'm concerned with is getting a false sense of success,ö he said. "Sometimes you pick up bad habits by beating teams like that. It's important we get back to doing things the right way. I didn't get a good evaluation in watching the Martin game as far as what we want to be, and the teams we have to face coming up.ö

The Racers kept rolling though, as they crushed Tennessee State 76-54. Heading into the rematch with Austin Peay at the RSEC, they were 21-3 overall and 12-0 in OVC play.

But the 14-10 Govs played like they expected to win. They led at halftime and led throughout most of the second half.

With four seconds left Peay's John Fraley made two free throws to tie the game at 63. Then, instead of calling a time out, MSU inbounded the ball to Miles who raced down the floor and hit a jump shot as time expired to win the game. He was just 2-of-8 from the field before hitting the game-winner.

ōI was counting down in my head really,ö Miles said. ōWe did it in practice a couple times, me and B.J. We always work on the 5, 4, 3, 2, 1, and it came down to that situation.ö

Thomas played one of the best games of his career as he scored 23 points, made 4-of-6 three-pointers and grabbed 11 rebounds.

The Racers clinched the regular season OVC championship on February 16 against Southeast Missouri, as they cruised to an 80-68 victory. But that was almost overshadowed by a midcourt shot that Canaan hit from his knees.

ōWhen I first got the job here, really, the first day I was wondering why because it was a tough situation. But itÆs just a tribute that God is faithful and he got us through it and IÆm very thankful for it.ö

Canaan's shot was ESPN's Play of the Day and the YouTube video got over two million views.

The Racers closed out the regular season by winning two of their final three games with the loss coming at Morehead. Then they rolled through the OVC tournament, beating Morehead in the final 62-51.

Canaan led the way against the Eagles as he scored 16 points, hitting 3-of-5 three-pointers in the process.

"I just came into the game and tried to get into the flow of it and not force anything," he said. "The guards on our team are like the engine for a car. We try to get the other guys going and tonight it worked."

"It is very humbling to be the head coach at Murray State University and represent a great community and basketball tradition," Kennedy said. "We stepped up tonight when things weren't going well for us. We have a bunch of MVP's on this team and it was a big night for all of us."

Canaan was named MVP of the OVC Tournament and Freshman of the Year. Miles and Jenkins were first team all-conference selections while Easley and Thomas were named to the second team. And Kennedy was named Coach of the Year.

Murray State drew Vanderbilt in the first round of the NCAA tournament and although  Vandy was favored, the Racers were undaunted.

ōI think we have a team that can win in the NCAA tournament,ö Kennedy said. ōMy goal when I came here was to build a team that could go into the tournament and have a chance to win. We're going in there to win.ö

ōI think itÆs the perfect matchup for us,ö Easley said. ōWeÆve come into this whole season where we feel like weÆre pretty good, and nobodyÆs really recognized us, and I think itÆs one of those games we can really show off to the world that weÆre a big-time team and weÆre worthy of this.ö

And that's exactly what they did.

The game was a see-saw affair, as the lead changed hands eight times. With four seconds left Murray State had the ball with Vandy leading 65-64.

After a timeout the Racers' Jeff McClain inbounded the ball to Miles who was immediately double-teamed, so he quickly passed it to Thomas. Thomas put down one dribble to free himself, then rose up and nailed a jumper from the right wing to win the game 66-65. And then, pandemonium ensued as Thomas was mobbed by his teammates.

ōI was trying to find a hole so I could breathe,ö he said with a laugh. ōEverybody was just piling up on me, but I didnÆt really care, we were celebrating.ö

It was the Racers' first win in the NCAA tournament since 1988. Lindy Suiter, a longtime fan and publisher of the Racer Insider attended both games.

ōOf course the win over North Carolina State was special because it was the first one,ö he recalled. ōBut this one ranks right up there, itÆs right up there with it. ItÆs special for my dad, too because he was the one who started me out as a Racer fan.ö

Murray State student Lyndsey Magness told the Paducah Sun, ōIÆm pretty excited. I canÆt hardly think straight. IÆm so excited. After it happened I was shaking and almost fell over the seat in front of me. But it made it worth the trip definitely. I think it kind of makes it worth the tuition, too.ö

It almost didn't matter that the Racers lost to Butler 54-52 in the second round. Of course the Bulldogs made it all the way to the final game where they lost a squeaker to Duke.

The Racers' opponents shot just 38.7 percent from the field. That was the best defensive field goal percentage of any MSU team since the 1957-58 season.

National champion Kentucky hit 37.4 percent of their shots in 1957-58. It was a different game back then. The Racers' defense was so stifling it was as though they sent their opponents back in time 50 years.