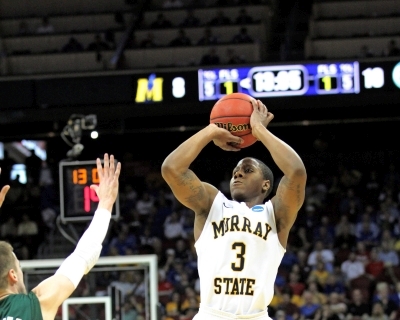 Isaiah “Lil 'Sip” Canaan didn't waste any time in establishing himself as one of the best freshmen point guards in the country this year. In the opener at California he scored eight points and had two steals... on national television... against a top-15 team, while matched up against preseason All-American Jerome Randall.

Not exactly what you'd expect of a 6-0 freshman from Biloxi, Miss. who was overlooked by most of the high majors in the south.

And over the next three games, he proved it wasn't a fluke as he averaged 14 points and two steals while hitting 11-of-19 shots from the field and 3-of-8 three-pointers.

And then six weeks later he hit “The Shot” against Southeast Missouri. He lost control of the ball near mid-court as the shot clock was running down and had to just flick it at the basket from his knees. And it went in.

"I was just thinking 'don't turn it over,'” Canaan explained. “So, I just threw it up there and it went in. I was shocked. You see guys make shots like that in practice when they're just messing around, but to do it in a game is something special. I try it every other day in practice and I make one or two out of five. I'm getting pretty good at it.”

It was actually his worst game of the season, as he scored just five points on 2-of-8 shooting with four turnovers. He was 1-of-5 from behind the arc, the midcourt flick being the only one he hit.

But none of that mattered. He made ESPN's Top Plays, and was a guest on ESPN2's First Take program. The YouTube video of “The Shot” has over two million views. With one flick of his wrists he generated more publicity for Murray State than anyone could have imagined.

He won the OVC Freshman of the Year award in a runaway and was named to the All-Newcomer team. Many thought he should have been a second team all-conference selection.

“It may be that they just didn't want to put more than four Murray State players on the first and second team,” he mused. “I'm sure people wouldn't have liked that. But I'm happy with winning Freshman of the Year. I've still got three years left to make the all-conference teams.”

Canaan was also named Most Valuable Player of the OVC Tournament. The first freshman to be so honored since 1993.

“It's a big deal,” he said. “But without my teammates pushing me every day I wouldn't have won that award, or be the player I am today.

“This year has turned out far better than I could have expected. I knew I was coming to a good team and I was sure we were going to win a lot of games. But I never expected all the individual honors. I work hard every day to try and make myself and my teammates better.  And all that hard work and dedication has paid off.

“The coaches told me when they were recruiting me that I would play a lot as a freshman and I believed them. They lived up to what they said too. I didn't start but I got over that. I knew I had to take my place in line. And I played as much as the starters did, although I didn't realize that until the middle of the season.”

One of the more surprising things about Canaan is his confidence.

"I think I can guard anyone and I won't back down from anyone,” he said. “If they make a play, they better expect one coming right back at them. They put their shoes on the same way I do.”

Again, not exactly what you'd expect from a freshman. Yet when you consider his upbringing maybe it's not so surprising after all.

“My daddy was always on my case even after youth league games,” Canaan recalled. “He never talked about all the good things I did. He just told me what I needed to improve on. That used to get to me. But I realize now that all of his constructive criticism is paying off. And I get a lot of confidence from that.”

A year ago, Canaan was watching the NCAA tournament on television. In just a few days he'll be right in the middle of the Big Dance. And although he seems almost giddy about it, it would be a mistake to expect him to approach it with anything but aplomb.

“I actually get to go to the NCAA tournament my freshman year,” he said with a big grin. “That doesn't happen every day. I'm just thanking God for that and for giving me the ability to play so that I can showcase it for whoever is watching.

“We're approaching the tournament just like any other game. We're going there to win. And we're preparing to win. We want to show the world we can compete with the bigger schools. And, I'll always have something to pull out of my bag for the fans to see.”