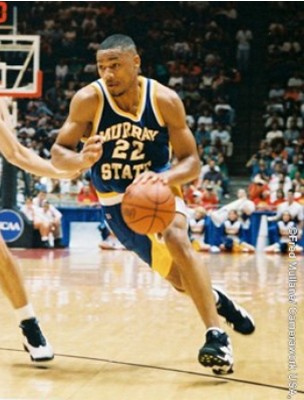 The MSU Hall of Fame has selected former Racer men's basketball star Vincent Rainey (1993-97) for induction this fall. Rainey is a three-time Ohio Valley Conference selection and part of a historic period of Racer Basketball in which the program won four-straight OVC regular season championships and made two NCAA Tournament appearances.

Arriving at MSU from Fairley High School in Memphis, Rainey was recruited by Coach Scott Edgar and finished up at MSU as the No. 6 all-time scorer at MSU and one of only 18 Racers to score 1,000 points and grab 600 rebounds.

Rainey,'s sophomore through senior seasons were OVC Player of the Year material, even though he never won the award. However, at the time, he was oneVincent Rainey of only eight Racers to be named All-OVC three times. Since he played his last game in 1997, only Isaac Spencer, Isaiah Canaan and Isacc Miles have matched three, or in the case of Spencer and Canaan, earned four All-OVC awards.

He went out in a big way in the 1996-97 season when he scored 656 points to be the seventh MSU player to score 600. Against rival Austin Peay, Rainey flirted with a triple-double on 25 points, 10 rebounds, and seven steals. He helped the Racers win the OVC regular season title and led the Racers to the NCAA Tournament where the 15th seeded Racers took the second seeded Duke Blue Devils down to the wire. Rainey's 23 points led the Racers in a 71-69 loss.

"When I first got the call that I was going into the Hall of Fame, it was bitter sweet," Rainey said. "I wish my mother and Gearl Suiter were here to see this. I would like to thank all of my teammates, coaches, and trainers from every team that I played on and Murray State University and all the people that helped me directly and indirectly. In my high school days through Murray State, the Ford family, Edgar family and Suiter family became my family. Thanks to my beautiful Mother and Dad, Jr. Shun, Joe Kiethon and my entire family, and last but not least, the most high! And a special thanks to my wife, Darcel and my children, Vincent and Skylar."