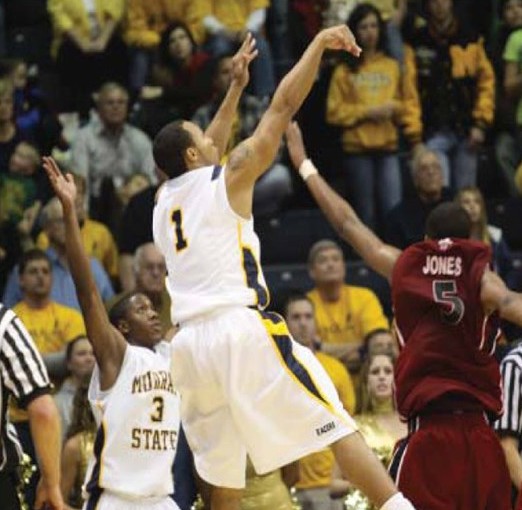 On the court Jenkins is a deadly long range shooter who can also get his own shot off the dribble, and create for his teammates. Through six games he is averaging 11.2 points in just 24.7 minutes per game. Against California he hit 4-of-7 three-pointers, and against North Carolina Central he hit 3-of-6. He is tied with Isacc Miles for the team lead in assists with 25 and he has an assist-to-turnover ratio of 2.8-1, the second best in the Ohio Valley Conference.

“Instead of going to his seat, Jenkins could see Long was upset, and he sat beside him. I wasn't eavesdropping, but as one of three people on the bus, I could hear Jenkins encouraging Long. Before he left to go back to his seat, he had left Long smiling and reassured.”

“It’s like Isaiah (Canaan). He has a great chance to be Freshman of the Year. But sometimes he gets down on himself and I feel like I have to pick him up. It’s my job to be there for my teammates because I know they’ll be there for me.”

Of course Jenkins' parents both played team sports. His father was a basketball player and his mother played softball. So, he comes by it naturally.

“I was born into sports,” he said. “When I was a little kid I had a Fisher Price hoop in the kitchen. I would watch Michel Jordan and everything he did, I'd try to do on the Fisher Price hoop.

“I started playing youth league in Virginia Beach, Va. when I was about nine. When I was about 12 I played for Coach Dave, David Sneed. He was the first coach who really believed in me and that meant a lot. I still talk to him to this day. He's one of my closest friends.

Jenkins finished his high school career as Green Run's all-time leading scorer with 1,357 points (17.4 points per game). He also had 506 rebounds, 511 assists and 383 steals. He was a three-time All-Beach District First Team selection and he earned a spot on the All-Tidewater Area Second Team and All-Eastern Region squad in his last three seasons at GRHS. He is the only player in Virginia high school basketball history to record consecutive quadruple-doubles.

As a freshman at Liberty, Jenkins played 14 minutes per game and averaged 4.8 points while shooting 37.2 percent from three-point range. He started two games, scored 16 points against Southern Virginia, and reached double figures on five other occasions.

“When I decided to transfer they put it on the internet,” Jenkins said. “I got a call 30 minutes later from coach (Billy) Kennedy. He told me they were interested in me and thought I would fit in with their program. He sounded sincere and like he knew what he was talking about. Maryland contacted me too but it was late and they didn't have any scholarships left, so I would have had to pay my own way the year I sat out.”

Of course once he got to Murray State, he had to spend a year on the sidelines before he could play.

“Sitting out a year was very difficult,” Jenkins said. “When you're doing conditioning and you're about to pass out you tell yourself it will help you during the season. But it wasn't going to help me, because I wasn't going to play.

“I think it made me a better player though. I had never really gotten to observe before. As a player, you know the pace of the game is important but when you're on the court you can't really see it. Watching from the bench gave me a better sense of when you should slow down, and when you should speed up.”

Unfortunately last season ended with a whimper as the Racers lost in the semifinals of the OVC Tournament to Austin Peay. And even though he didn't play in that game, Jenkins carries the pain of that loss with him still.

Billed as an outstanding offensive player, Jenkins is extremely tough on the defensive end as well. He is averaging two steals per game, second best on the team and third in the OVC. You might think his defensive skills were developed through a lot of hard work, but when asked, Jenkins said that isn't the case.

“Not really,” he demurred. “Defense is all a mind set. You tell yourself that you’re not going to let your man get past you. And it’s not so much that I have quick hands. I just keep them moving. You’re more likely to accidentally get a deflection if you keep your hands moving. My hands are quick but I get a lot of accidental deflections.

“My mom gets on me about my defense more than anyone. I know if I don’t play good defense I’m going to hear it from her. She’s my #1 fan.”

With Jenkins helping to lead the way, the Racers got off to a great start, winning five of their first six games. The lone defeat came at 12th ranked California by just five points, and most fans saw it as a moral victory.

“Personally, I was hot after that game,” Jenkins said. “And I know as a team we were not satisfied. We came in expecting to win. And we gave it away by turning the ball over too much. If we had limited our turnovers we would have beaten them hands down.”

Since then the Racers have jumped out to double figure leads in the first half in almost every game.

“Honestly I think we still have that bad taste from the Cal game in our mouths,” Jenkins explained. “We come out in the first four minutes thinking we have to make a statement. That’s where games are won, the first four minutes and the last four minutes. If you’re lazy at the start you just make it hard on yourself. If you can take control early you should be in the driver’s seat the whole game.”

The challenge now is maintaining that focus throughout the regular season and in the OVC Tournament.

“That won't be a problem,” Jenkins declared. “I think we can take the title. We’re better than we were last year, all-around. We’re deep. Everybody on our team could be a starter.

“Regardless, I’m happy to be a Racer. I’m thankful for my opportunity to play this game. And hopefully we’ll bring home a championship this year.”