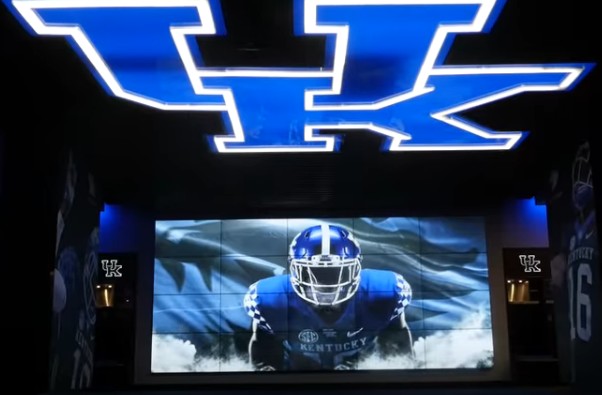 When the Kentucky offense takes the field in 2019, the team will have a much different look about it. While the Cats will have four starters returning, a big part of the UK attack from recent years will be missing.

The biggest missing piece from the last three seasons is Benny Snell, Jr., who became the school's all-time leading rusher during his career in Lexington. Over the past three seasons, all of which ended with the Cats playing in bowl games, if UK needed tough yards or to run out the clock when leading late in games, Snell would get the ball. And he would deliver.

Now, with Snell in camp with the Pittsburgh Steelers, it's time to find out what's next for the UK offense. Not that the cupboard is bare in any manner. Starting quarterback Terry Wilson returns, along with play-making receiver Lynn Bowden, Jr. That combination is expected to make the offense move this fall, but will the Cats be passing more this season than they have in the past three years? Offensive coordinator Eddie Gran addressed that question during Friday's media day.

"Everybody says we're going to throw the ball a lot more this year, so I'll get this out of the way right now," Gran said. "Everything starts up front in this league. It's about the physicality. Big men lead the way. If you cannot run the ball, you're going to have a hard time winning in this league."

Gran has a specific formula that he would like the Cats to employ.

"We want to be balanced. We want to be a little bit more balanced this year," Gran said. "If you had 80 plays, 40 throws, 40 runs, that would be perfect. That's the perfect scenario. What we have to do is be more efficient in the passing game and more explosive."

That's where Wilson comes in. As a sophomore last season, the Oklahoma City native connected on 67.2 percent of his passes for 1,889 yards with 11 touchdowns and eight interceptions. As a junior, Wilson is hoping to show a new dimension to the Cats' attack this fall.

Bowden is expected to take on a bigger role in the offense this season, something that the junior is prepared to handle.

"I know the load is probably going to be a little heavier," Bowden said. "I'm going to do everything Coach Gran and Coach Stoops need me to do. If that's giving me the ball, however many times they want to do it, then that's what I'm going to do."

Many eyes this fall will be on junior running back A.J. Rose, who will replace Snell in the backfield. Rose is prepared to step into the sizeable hole left by Snell. Rose learned a lot by watching Snell for the past two seasons.

"I learned to compete, every breath," Rose said. "Whether it's practice, game, walk-through, whatever. Benny had a great career here, all-time leading rusher here and I'm going to chase that the next two years that I'm here."

Despite the unknowns, the players are confident that the offense will be productive in 2019.

"I think this team is going to open up a lot of eyes, even though guys don't respect us like they should," Bowden said.

Wilson agrees with his standout receiver.

"We're loaded," Wilson said. "We have the depth that we need. It's going to be fun to show everybody what we can do and how explosive we're going to be."

Kentucky's new-look offense gets its first public showing on August 31 at Kroger Field against Toledo. And from the players' expectations, these Cats should be fun to watch.