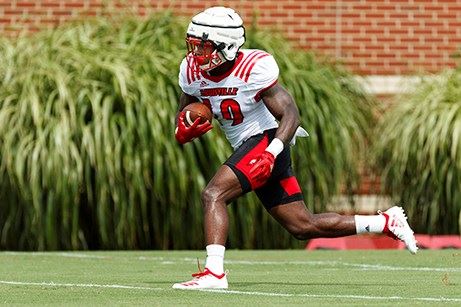 It's no secret that University of Louisville head coach Scott Satterfield puts an emphasis on running the football, and the Cardinals have the depth to be able to withstand the expected workload.

Throughout Satterfield's career as a head coach, his teams have leaned more toward running the football, and through the first four days of practice, the Cardinals are taking those characteristics of a running team.

"We know we are a run first team," running backs coach Norval McKenzie said. "To be able to handle the amount of carries, we have to have depth, and we have that here. We have seven guys in the room and I tell them that they have to take advantage of the repetitions. We are headed in the right direction, and with so many guys, it's an open competition."

The Cardinals put full pads on tomorrow for the first time, and McKenzie has been pleased with the progress in the first three days of helmets and shoulder pads.

"Overall, it's been pretty good," McKenzie said of the team's first three days of practice. "The guys have had a good offseason and have come back in shape. Right now, as a team, we have built on what we did this spring. The first four days of practice there is a lot of excitement and intensity and I'm happy with our progress."

While the Cardinals are deep at the running back position, sophomore Hassan Hall and redshirt freshman Javian Hawkins are the leaders in the backfield heading into Saturday's first scrimmage.

Hall is the team's top returning runner after rushing for 303 yards and three touchdowns in 2018, while Hawkins carried twice for eight yards in four games, securing his redshirt year.

"The biggest thing for Hassan and the other guys is teaching them how to practice," McKenzie said. "Hassan took coaching well in the weight room. He has developed more stature-wise with his physique. It's been a total commitment to nutrition, hydration and just taking care of his body."

"Javian has changed his body and has had a good week so far," McKenzie said. "He can run between the tackles and does a good job of getting outside. He's improved as a pass catcher, which is big for our offense."

Teams like to have one player carry the workload out of the backfield, but McKenzie is looking for two or three players to emerge to be the main ball carriers heading into the season opener versus Notre Dame.

"I think in our offense with how much we want to run the ball, you can't have just one guy," McKenzie said. "We have to have two or three guys who are ready to roll. It's my job to get these guys ready to be complete backs, which means running, catching the ball out the backfield and protecting the quarterback."

While a lot of the team's success this season will depend on the offensive line, Hawkins thinks his unit could be the most important group to turn around the team's fortunes.

"It starts with the running back position," Hawkins said. "This position is very important because we are a run-first team. We have to be able to run the ball to be successfully."