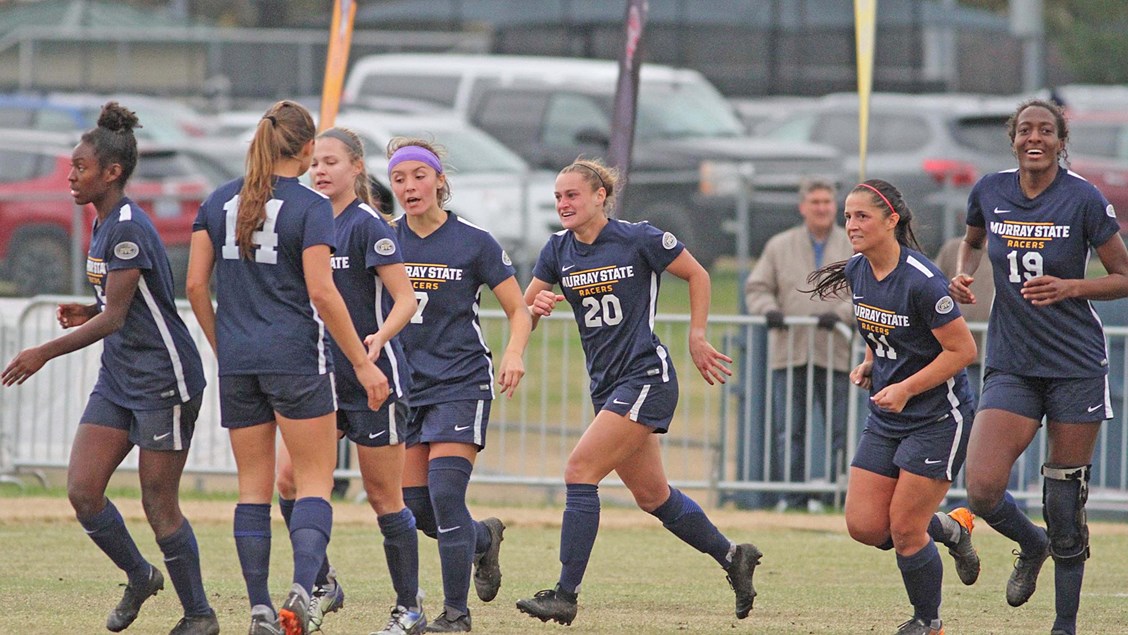 Murray State has been picked to win the 2019 Ohio Valley Conference title as voted on by the league’s head coaches and sports information directors. The Racers, who won their third straight tournament crown, received 18 of 22 first-place votes and 198 points. UT Martin, who won their fifth regular-season title last year, earned three-first place votes and 174 points for a second-place finish while Eastern Kentucky picked up the remaining first-place vote and 147 points for a third-place predicted finish. SIUE earned 134 points to be picked to finish fourth. Rounding out the poll are Eastern Illinois (106), Belmont (102), Southeast Missouri (95), Tennessee Tech (92), Morehead State (64), Austin Peay (59) and Jacksonville State (39).

Last year, Murray State went 7-3 in the OVC while going 13-5-1 overall to place second in the league. The Racers went on to defeat UT Martin in the championship match to win its third straight tournament crown last season. Matt Lodge enters his second season as the head coach and will have three All-OVC performers back from last season in sophomore forward Abby Jones, senior forward Miyah Watford and senior defender Karsyn Hasch.  Jones was named the 2018 OVC Freshman of the Year last season after ranking fifth in goals (8), second in points (25) and first in assists (9) in the OVC. Watford was second in the league last season in points (25) and goals (10) while leading the conference with 84 shots and 4.67 shots per game. Hasch was part of a defense that allowed just 10 goals in conference play. She played in all 19 matches last year and logged 1,695 minutes.

UT Martin went unbeaten in conference play last year with a 9-0-1 record while going 15-3-1 overall to earn its fifth OVC regular-season title. Phil McNamara enters his 10th season at the helm of the Skyhawks and will have junior goalkeeper Erica Myers and junior midfielder Alice Adams returning this season. Myers was named to the All-OVC First Team last year after ranking first in goals against average (0.82) and second in shutouts (6). Adams finished the year with three goals and four assists. She was fourth on the team with 43 shots, including 15 on-goal last season.

The 2019 season gets underway on Aug. 23 with conference play beginning Sept. 20. The 2019 OVC Soccer Championship begins on Nov. 1 and 3 with the first round and quarterfinals on the campus of the No. 3 and No. 4 seeds. The semifinals and championship will be on the campus on of the No. 1 seed on Nov. 8 and 10.

Larose, a 2018 All-OVC second team selection, started all 17 matches last season. She scored a pair of goals twice las year once against Alabama A&M and Jacksonville State. She led the team with seven goals which ranked 10th all-time in APSU history. She currently ranks 13th in career goals (10) and 10th in career game-winning goals.

Carlson as started all three seasons for the Panthers in the backfield. She was a 2017 All-OVC selection and earned OVC All-Tournament Team honors last year. Carlson earned OVC Defensive Player of the Week honors twice last year as she anchored a defense that posted eight shutouts, which is third most in school history.

Wolski started all 20 games last season, logging 1,616 minutes on the field. She has played in every game in her EKU career, making 54 starts. She was named to the 2016 OVC All-Newcomer Team

Meadows played in all 18 matches in 2018 and logged over 1,600 minutes. She recorded 21 shots from the midfield position as a junior with 12 being on-goal. She scored two goals in OVC play last season.

Palmer started in all 19 matches and played 1,553 minutes on the Morehead State backline last season. She was named to the 2018 OVC All-Newcomer team. She scored one goal on 17 shots and assisted on one goal last year.

Gonzales has recorded 24 goals in two years with the Redhawks, leading the team in goals the past two season. She earned All-OVC first team honors last year for the second time in her career. She is currently fourth all-time with 24 goals at Southeast Missouri. She is currently averaging 3.5 shots per game.

Frerker earned second team All-OVC honors last season. She started 16 matches and led the Cougars with nine points and four goals. Frerker was second on the tam with 45 shots.

Shipley started all 17 matches and was one of two Golden Eagles to play all 1,573 minutes to anchor Tech’s back line. She earned All-OVC First Team in 2018. She was part of a defense that recorded six shutouts last year.

Myers was named to the All-OVc First Team after logging over 1,300 minutes in goal and posting a 0.82 goals-against average. She recorded eight wins and 35 saves while tallying six shutouts. In conference play, she posted a league-low 0.64 goals-against average to go along with 29 saves in over 1,129 minutes played