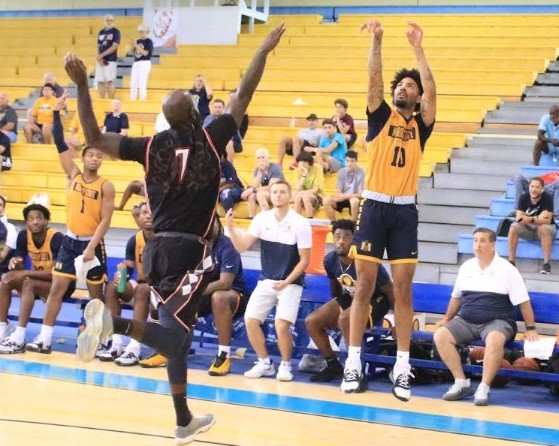 The Murray State Racers made a sweep of their three-game exhibition tour in the Bahamas Saturday with a 110-78 win over the Commonwealth Bank Giants at Kendal Isaacs National Gymnasium in Nassau.

The trip also included the Racers taking an 89-85 win Friday over Bahamas Select and a 115-61 win over Abaco Elite on Saturday.

In the final game, Tevin Brown scored 19 of his 25 points in the first half and hit 7-of-10 from the 3-point line to lead the Racers who had seven players score 10-plus points. Jaiveon Eaves scored 14, while KJ Williams had 13, Chico Carter and Anthony Smith scored 12 each and DaQuan Smith added 11.

Carter had a double-double when he tallied 10 assists and he ended up only two rebounds shy of a triple-double with his eight rebounds.

Brown had the hot shooting touch in the opening quarter. The MSU sophomore hit for 13 points on three 3-point baskets. The Racers led 29-20 after the quarter ended.

The Commonwealth Bank Giants used a 12-6 run at the start of the second quarter to get to as close as 35-32 with 6:22 before half. The Racers answered the run with one of their own. Brown hit his fourth three of the game for a 13-point lead for MSU and his fifth three of the game with 2:37 on the second quarter clock put the Racers in front 51-26. The Racers outscored the Giants 22-13 in the final 6:22 to get a 57-45 lead at halftime.

MSU hit the Giants with a pair of baskets in the first 30 seconds of the third quarter to push in front 62-45. DaQuan Smith hit a 3-pointer and Devin Gilmore’s rebound and put-back put the Racers in front by 16 points with 6:33 remaining. The lead went to 21 points at 76-55 when Williams rebounded his tip try twice to score. Brown hit two more threes in the quarter to give him seven for the game and an 86-61 Racer lead as they won the quarter 29-16.

Allowed once every four years by NCAA rules, international exhibition tours like these are a bonus for teams who get three games and 10 practices they normally wouldn’t get this time of the year.

“I’ve been thrilled with the trip,” MSU coach Matt McMahon said. “First and foremost, this has a great learning experience and the chemistry and comradery that has been built within our team has been a success. The basketball was really good for us as well. We had to find a way to tough out a win in game one and we faced some good national team players from the Bahamas in these three games. The last two games, we got better offensively and cut down on our turnovers and that led to balanced scoring.

Now that the exhibition games have come to a close, the Racers look forward to starting fall semester classes on Aug. 20. Ohio Valley Basketball media day (Oct. 22) and Racer Mania (Oct. 24) will also be here soon.

“This is truly a once in a lifetime opportunity and I want all of our team to enjoy this,” McMahon added. “We’re thankful for our generous supporters and fans and last season’s NCAA team to make a trip like this possible. That’s what Racer Basketball is all about."

The Racers come back to Murray on Tuesday.