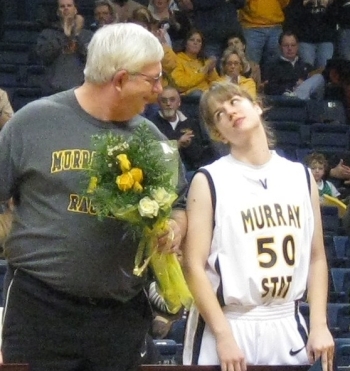 An imaginary conversation after Paige Guffey connects from downtown... Opposing coach - "I told you to guard the three." Stunned defender - "That wasn't a three. That was a five!"

A lot of players shoot from beyond the arc but Guffey shoots from the next zip code. Give her room and she'll rain down a barrage of 25-to-30 footers on you.

"I really didn't shoot that deep the first two years I was here but last year (former head coach) Jody (Adams) told me to do that so I said, "Okay.' They had me practice shooting deep shots last year and I do it this year too."

A senior, Guffey is starting in the backcourt alongside her twin sister Amber this year after coming off the bench her first three seasons. And although people have trouble telling them apart she says there are differences.

"I'm an inch and a half taller and I wear my hair differently," she said. "Amber is more outspoken than I am. She's also a better passer and I like sweet potatoes more than she does."

Guffey came to MSU from tiny Albany, Ky. in the south central part of the state.

"It was great growing up in a small town," she said. "But I didn't really do anything except play basketball, visit my grandparents and go to church. I'm a Christian so that's very important to me. I try to live right and do what's right all the time. That's why I act the way I do. I try to live my life to glorify God.

"There really just wasn't much to do in Albany. They have a McDonalds there now but it wasn't there when I was growing up. They got it right after I left. I knew that would happen! I love McDonalds."

Basketball was always a part of Guffey's life because her father, Ronnie, was the coach of the boys team at Clinton County High School.

"Amber and I played one-on-one all the time and my dad would ref," she recalled. "I needed a ref because Amber would call stuff that wasn't true - like fouls. And that helped make it fair for me. She would say she won more than I did but it was really about half and half.

"We were on different teams when we played 'little league' and Amber's team beat my team. And she wouldn't be quiet about it. She still reminds me that she beat me and I say, 'So? That was 'little league.'"

Guffey played a couple of games for the high school team as a sixth grader and the next year she played the entire season for Clinton County head coach Gary Abbott.

"He was a nice guy and he knew a lot about the game," she said. "Unlike some coaches he really didn't yell much at all. He was calm and just told you what you should do."

Her father took over the girls' team when she was a junior so she played two seasons under his tutelage.

"I liked playing for my dad but it was different because I had a relationship with him," she noted. "It was kind of hard to separate our family relationship from basketball at times. But he's a great coach and he's very knowledgeable about the game. He taught me everything I know about basketball.

"He's quite different from coach Abbott though. He yells a lot and he expects you to do the right thing all the time. But I think both styles of coaching work and I like both of them.

"He coached the boys for 20 years before he coached us. And he really got angrier at them because we were good. He made them run a lot. He only made me run once and that was because I talked back to him."