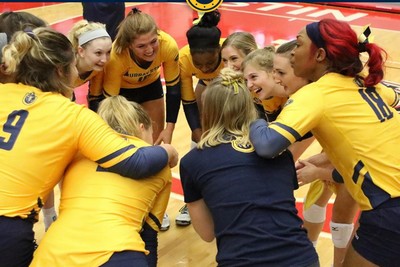 After winning their third Ohio Valley Conference tournament in five years in 2018, the Murray State Volleyball team are OVC favorites once again as they have been picked first in the 2019 preseason poll.

The Racers received a total of 228 points, 16 clear of Austin Peay. MSU also half the first-place votes with 12 followed by Austin Peay with six, Morehead State with five, and Jacksonville State with one.

Senior Rachel Giustino and junior Becca Fernandez were also named to the Preseason All-OVC team. Both were named first-team All-OVC in 2018 with Fernandez being named OVC Co-Defensive Player of the Year after leading the league with 581 digs and ranking third with 5.01 digs per set while Giustino led the league with 470 kills and 4.05 kills per set last season.

The Racers will begin the 2019 campaign on August 30 when they take on Valparaiso at the IUPUI Invitational. They will begin OVC play at Eastern Illinois on September 27 before playing their home opener, October 4 against UT Martin.