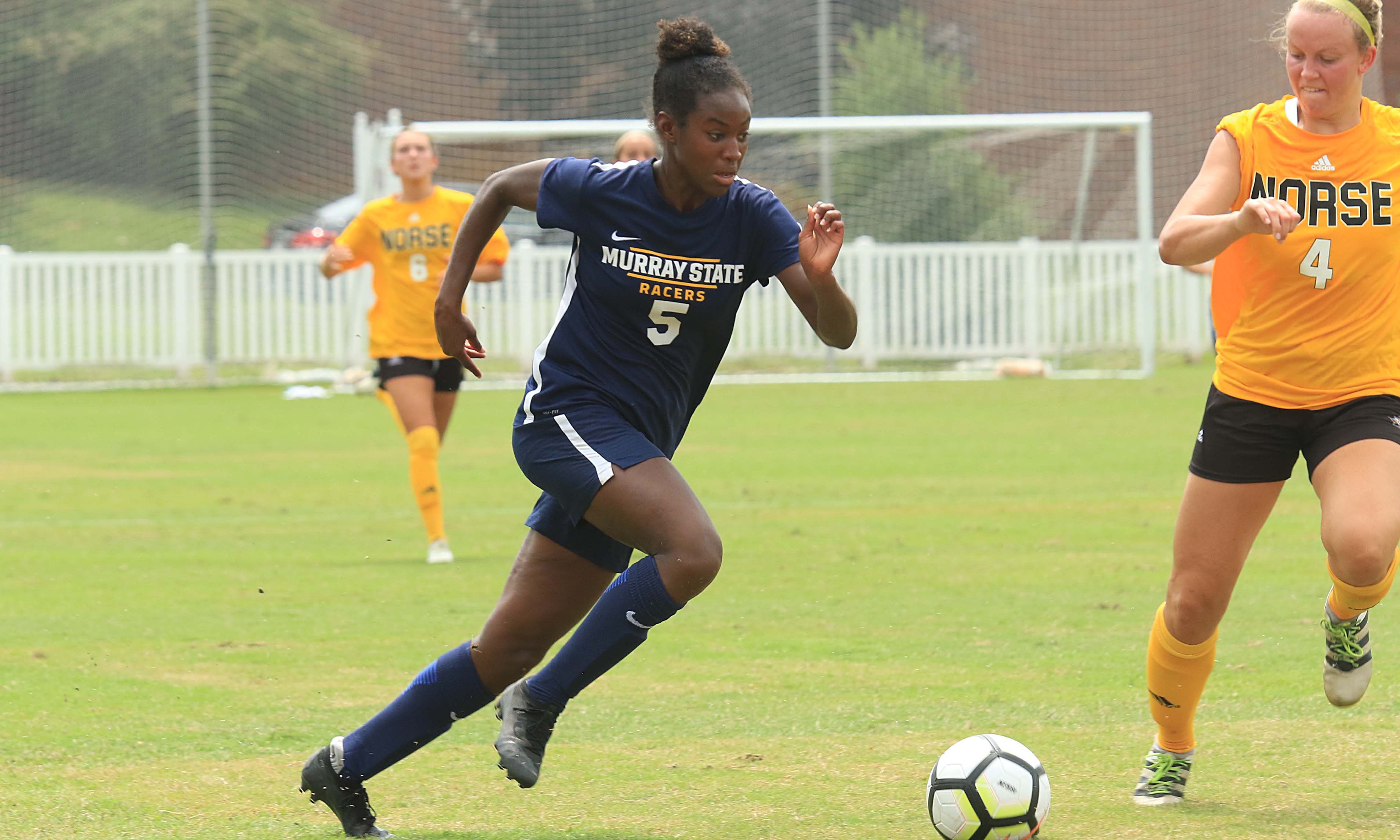 The Murray State soccer team recorded their second-straight win of the season at Cutchin Field in a 2-1 overtime victory over Northern Kentucky on Sunday.

Murray State (2-0) got on the board eight minutes into the match when junior Miyah Watford found the back of the net for her first goal of the season. Watford's goal came off a crafty assist from freshman Abby Jones.

"It doesn't matter what day it is, what she has done the day before, if she is sick, or if she's got a broken leg," said MSU head coach Matt Lodge when asked about Miyah Watford. "She is going to give her everything, and she is going to create chances. Everything we did today was through her."

The Racers held the 1-0 lead going into the half on nine shot attempts, while the Norse closed the first period with three.

Less than a minute into the second half, Northern Kentucky was awarded a penalty kick inside the box. NKU's Shawna Zaken converted the penalty kick with a stealthy shot in the lower left corner and evened the match 1-1.

While each team had several scoring opportunities in the second stanza, neither squad was able to break the tie setting the stage for MSU's first overtime of the season.

Just as they did in the first half of play, the dynamic duo of Watford and Jones relied on one another yet again to provide Murray State the golden goal in just 1:40 seconds. Watford received the pass from Jones, struck the ball from the right side of the box, and watched as it rolled by a diving Emily Lohmann into the far corner of the net for the game-winning goal.

"This is one that we really needed. A game like this one where we have to grind it out and goes into overtime. It has been a character builder for us, especially going into conference play in the future weeks," commented Lodge.

The Racers finished the day with 19 total shots with eight on goal, while NKU ended the contest with nine shots and three on goal.

MSU will be back in action at Cutchin Field Friday at 3 p.m against IUPUI (Aug. 24) before traveling to Oxford, Mississippi to take on Ole Miss (Aug. 26) in their first road game this season.

Murray State improves to a 3-1-1 record all-time against Northern Kentucky.

Miyah Watford's two-goal performance makes her the 52nd Racer in history to score two goals in a single game.

Murray State will host IUPUI (Aug. 24) at Cutchin Field before the Racers head to Oxford, Mississippi to take on Ole Miss (Aug 26.). The Racers will then be coming back home to face FAU (Aug. 31) in their final contest for the month of August.