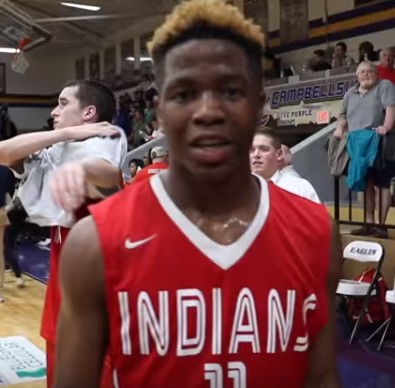 Various news outlets reported last week that unnamed sources had told them that Marshall County's Zion Harmon had been ruled ineligible by the KHSAA. Harmon transferred to Marshall over the summer, after playing last season at Adair County. So far, these reports do not seem to have been confirmed by Harmon's family, the KHSAA, or Marshall County. When the Lexington Herald Leader contacted Harmon's father last Wednesday, he said he hadn't heard anything about it.

Harmon averaged over 30 points last season at Adair County and is considered one of the best sophomores in the nation. He currently has offers from Tennessee, Vanderbilt, Auburn, and Creighton, among others. He has made unofficial visits to Kentucky and Kansas.

Now, it is not unusual for the KHSAA to rule that a high profile player is ineligible after he transfers and then allow an arbiter to hear an appeal by the player and issue a final ruling. Harmon's family moved to Marshall County during the off-season and he is an honor student. So, if he has been ruled ineligible, it may well have been a pro-forma ruling.

Most Popular Stories in July